Tuesday 12 May 2020 | Written by Losirene Lacanivalu | Published in Local 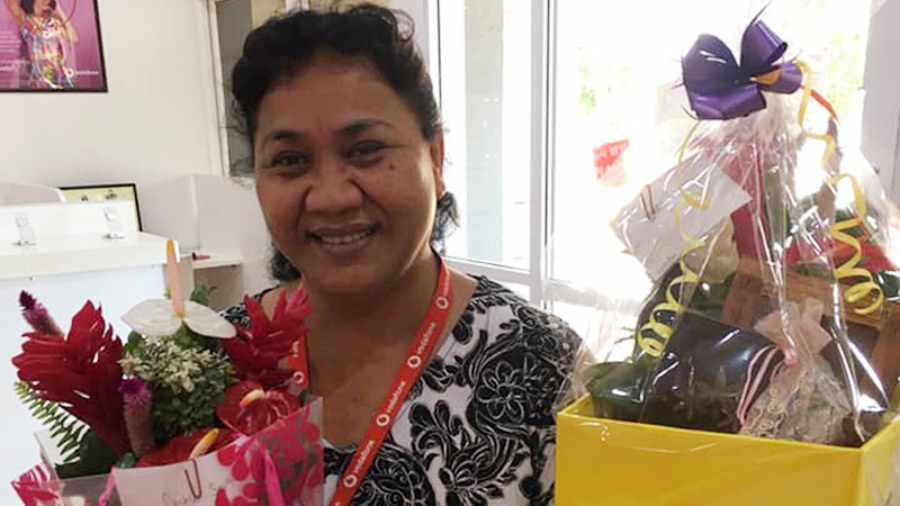 Mata Eliaba holds her flowers ordered by her sons Hughie and Maeva in Australia. The other bunch of flowers were for her daughter. 20051110

When Cook Islanders around the world ordered flowers for their mums back home on Rarotonga, Aitutaki and Mangaia, some expected the roses and carnations that are traditional overseas.

These are blooms that are traditional in cooler climates, perhaps – but certainly not local to the Cooks

To meet the demand, Island Craft ordered cut flowers to be air-freighted from New Zealand on Friday.

Sure enough, Air New Zealand flight 946 roared in over the seawall to great excitement with about 130 returning Cook Islands residents and their luggage – but unfortunately, the flowers ordered by Island Craft had been offloaded in Auckland.

With just one small Airbus 320 Neo coming in this week, there wasn’t space for all the people and luggage and critical food and medical supplies, as well as the flowers.

So how, then, did Island Craft manage to deliver flowers to delighted mums around Rarotonga and the Pa Enua?

Mata Eliaba’s fresh flowers was delivered to her at work at Vodafone on Friday afternoon, specially ordered by her sons Hughie and Maeva in Australia .

She and her daughter both work at Vodafone, and were both delivered their special flowers to the office.

Mata was amazed: “It was nice for the boys to think of us, my bunch was bigger and too heavy to hold,” she laughed.

Island Craft’s managing director Fletcher Melvin explained: “We did not count on the flowers from New Zealand because we had advertised local flowers in our arrangements. The reason is that there was a possibility of this happening so it was not a complete surprise.”

Though they did lose money, they understood that there are more urgent freights like food that needed to be freighted instead.

“We now know that getting overseas flowers will be difficult but this means more flowers from our garden and suppliers that can be used.”