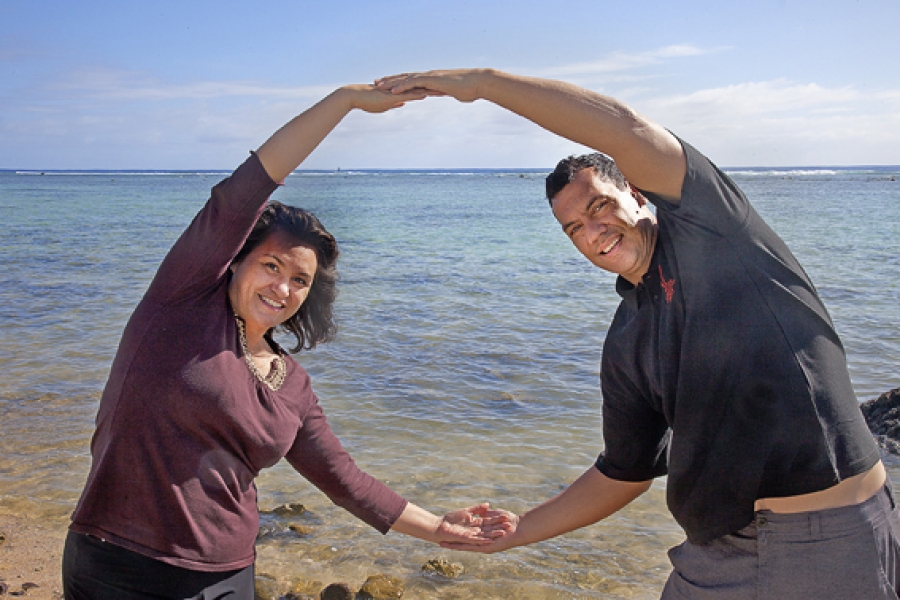 Marae Moana advocates Kevin Iro and Jacqueline Evans celebrate the passing of legislation this week that has made the entire Cook Islands Exclusive Economic Zone the largest multi-use marine reserve in the world – acknowledging the concept as a return to the conservation beliefs of our nation's forefathers. 17071252

The Cook Islands is now the largest multi-use marine park in the world.

A massive feat for a country with only a tiny 237 square kilometre land area.

The entire Cook Islands Exclusive Economic Zone – an area similar in size to the landmass of Mexico – is now officially designated as the Cook Islands Marine Park.

Possibly the most significant piece of legislation since Independence, the monumental bill was passed in parliament with resounding bipartisan support.

What started out as one man’s vision has been passed into ocean saving legislation.

After five years in the making, local environmentalist Kevin Iro’s concept to protect the ocean surrounding the Cook Islands has finally come to fruition.

Iro, co-chair of the Cook Islands Marine Park Steering Committee, said the bill signifies “the sacredness of how Cook Islanders view our ocean space. It links us to our ancestors – it’s more than just the ocean”.

Iro said that he is very excited, especially with the bipartisan support Marae Moana received by all factions of parliament for a bill that truly reflects what the people wanted.

Prime minister Henry Puna praised Iro for his vision, personally acknowledging him in the public gallery of parliament.

Puna explained cabinet had been approached by Iro, “one of our pioneers”, who had conceived the idea as a board member of the Cook Islands Tourism Corporation.

“Together we had a vision to turn our little country into the cleanest and greenest tourism destination in the whole wide world.

“And our commitment is the largest in the history by a single country for integrating ocean conservation management from ridge to reef – and reef to ocean,” Puna said.

The Prime Minister delivered a stirring speech in support of Marae Moana that Speaker of the House Nikki Rattle described as a “beautiful encounter of the journey of the people of the Cook Islands”.

Puna said: “Our people loved the idea. In fact, they loved the idea so much that they wanted the Marine Park to be extended over the entire Exclusive Economic Zone (EEZ) – an area spanning nearly two million square kilometres.

“Our Government wanted to bring reality to the voice of our people.”

The bill establishes Marae Moana over the entire EEZ – and gives the Cook Islands marine protected areas around every island where no commercial fishing or mining are permitted.

Exclusion zones, recently approved by cabinet in May, extending 50 nautical miles from each and every island – this area is reserved specifically for the enjoyment of the local people of each island.

“Socially, economically and spiritually we must all take care of it – and it is imperative that all those that live and exist both within and beyond its boundaries do recognise and respect its sanctity,” the Prime Minister said.

“We do not only recognise that the ocean brings us revenue in terms of fishery and tourism and potentially sea bed minerals – it also provides us with clean air, clean water, and clean food to nourish and sustain us.”

“So this bill aims to sustain our livelihoods by protecting species and ecosystems as well as our cultural heritage that we inherit and pass on to future generations.”

He said the Marine Park will provide the framework to promote sustainable development by balancing economic growth interests with conserving core biodiversity and natural assets in the ocean, reefs and islands"

The name Marae Moana was conceived by a student of Tereora College, Bouchard Solomona, during competitions to develop a name and a logo in 2014.

Puna said the name perfectly encapsulated the way Cook Islanders regard and respect the ocean.

“We borrowed this idea from our forefathers who considered the entire ocean as sacred and specially recognised it as one ecosystem,” he said.