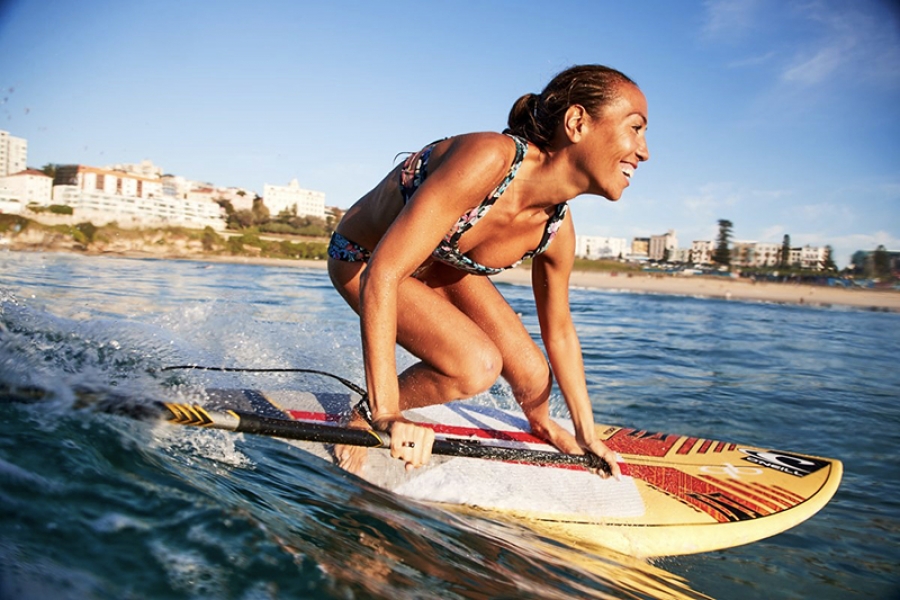 Carving it up on her home break at Bondi, where she is a regular surfer featured on Aquabumps.com. Piho will be travelling to Hawaii next year to compete in a big wave event at the Sunset Pro. Hopefully she will be representing the Cook Islands. Photo: Aquabumps 17100509

A HEADSTAND on a floating paddle board… “No way!”

That’s what I thought when I first saw Charlotte Piho pull off the seemingly impossible manoeuvre for Australia Channel Nine’s Today breakfast show on Muri lagoon a few weeks ago.

As it turned out, it’s just one of the trademark yoga poses she has mastered over the years.

And aside from doing amazing yoga poses on screen in front of hundreds of thousands of people while they eat their breakfast cereal, the Cook Islands girl from Bondi is also a fearless big wave rider, heading off to Hawaii early next year to surf one of the biggest breaks in the world, Sunset Beach.

But, to truly understand this “water baby”, her father Tuhe recently told me, I have to first watch the children’s animated film Moana.

“She’s the real Moana”, he said with a smile.

Apparently, since she was a child, in the same way as the cartoon character, Piho has held a fascination with going beyond the reef, to the open ocean, where the big fish are.

And that’s exactly what she’s done with her life…

She’s created an international reputation as a respected Stand Up Paddle (SUP) yoga guru. Piho, basically wrote the book on Stand Up Paddle yoga in Australia, creating the workout craze from scratch. And she is only one of a handful of people on the planet so far, to make a successful full-time career out of SUP yoga.

In the last six years, she has travelled all over the world including Singapore, London, Europe, California, Florida, Mexico, Fiji, Indonesia and the Cook Islands, running teacher training workshops.

Piho now spends around 50 per cent of her time in Australia as a master trainer for anyone wanting to set up a SUP yoga business, while the rest is spent in Rarotonga, running retreats that leave her guests, usually from busy Australian cities, feeling at one with the universe.

I jumped in on one of her sessions recently, when invited to see what it was like first-hand, and to find some enlightenment myself.

I wasn’t disappointed. Apart from the idyllic setting and the experience of gently floating on Muri lagoon metres off a sheltered Koromiri motu, right on sunrise, Piho also takes her clients on a journey to a higher plane of inner contentment.

“How” you may ask? She say’s yoga makes you a ‘softer’ person, not in a weak sense, but a kinder gentler soul.

As apparently yoga is all about breathing, and it seems to me like inhaling the positive and exhaling the negative really must work over time – as Piho is a living and breathing example of calmness, serenity and kindness.

The exercises are also all about getting air into the body she says, removing blockages, and ultimately aligning the mind.

And, if you also want to cut back on expensive skin treatments, or even botox, the workout also helps you feel and look younger, as it’s an antidote to getting wrinkles. Yup, just by breathing properly.

For anyone else out there who is unsure if they would be able to tackle SUP yoga, Piho says she has had people complain that they can’t do yoga on land let alone on water. But she tells them, “If you can breathe, you can do yoga”. It’s as simple as that.

The routine itself pushed the limit of my flexibility, bending legs and arms behind and below me like I hadn’t done since I was a kid.

Starting off with easier, traditional downward and upward dog, and cobra positons - to becoming a “human wheel”, with legs and arms arched to the point of no return. And other fun poses, such as “happy baby”, and “warrior two”. But the trickiest by far is Piho’s ninja-like headstand pose, which is, understandably, very good for improved blood flow to the brain…

While she pulled her legs effortlessly above her in one fluid movement, it looked impossible for us novices to replicate.

During the session, I had subconsciously willed myself not to fall off the board, and was doing darned well I thought, until it came to the headstand. Even with the help of Piho’s father Tuhe stabilising me, I came crashing down onto the board and into the cool water.

However, apparently even a novice can master this move in a matter of days, with a bit of focus, a little faith and genuine commitment.

The routine finishes with a calming meditation to completely let go, and I now understand why many millions around the world practice yoga every day.

SUP yoga is the most recent variation of the ancient exercise and adds a very appealing outdoors aspect to it, especially in such a panoramic setting as Muri lagoon.

Piho’s life right now may look an idyllic existence: Living in paradise, travelling the world and following her passions, but it’s also come at the cost of a near-death experience.

Nearly dying in her mid-20s following a burst appendix, she was laid up in hospital, unable do anything.

“I almost died and that’s why I moved to the Cook Islands.”

She gave up her executive career in the fickle world of high-end fashion after the illness showed her it doesn’t matter how much money you have, especially when it comes to your health.

She’s also had a couple of other near misses on Raro - in a motorcycle crash and hitting the reef badly in a surfing accident.

Piho says she’s been grateful to have yoga, especially during those hard times of recovery, as being able to soften through exercise, is just as good as going for a big run, or surf to re-energise.

When Piho, now 33, started doing SUP yoga over eight years ago, she didn’t know it existed as a workout.

She had been teaching paddle boarding at Pacific Resort in Muri, and while practicing yoga on her board one afternoon, she was asked by some guests if she taught SUP yoga. She said she didn’t, but then thought she’d give it a go anyway. And, her first client enjoyed it so much they wanted to do it every day of their stay.

After this seed was planted, Piho then attempted to grow a SUP yoga business in Rarotonga, but after a few months found she wasn’t making much money out of it.

That was all destined to change when she later launched her “workoutonwater.com” website, and set up her sought after retreats to the Cook Islands… while also attracting a massive social media following of over 60,000 instagram followers. Piho first went back to Australia to get some money behind her, and gain her yoga certification.

“I wanted to live and work in Rarotonga, but needed to set myself up better. The whole idea was to get a market in Australia, where I was also based, to bring clients over to the islands.”

She also said the energy in the Cook Islands is like no other place on the planet, and in this environment can offer her clients a workout experience with no equal.

“I used to do a lot of SUP yoga in Australia, but feel I can’t give the same quality lesson there as I can in Rarotonga or Aitutaki, simply because the energy here is so amazing.”

And, being born and bred in New Zealand, the Cook Islands has always been calling her home.

Her father is from Rakahanga heritage, and Piho remembers many visits to Rarotonga as a child while her grandparents were living here.

She says, “We’d always swim in the lagoon, and I always wanted to go out – where the waves were, where the fishermen went.

“But my parents would say no, you stay in the lagoon. They thought I had deaf ear as a child, because they thought I couldn’t hear when they’d say, ‘get out of the water’.

“I was always a water baby, and just like Moana, always wanted to get out past the reef with a fascination for the open ocean.”

Nowadays, when she’s not teaching SUP yoga, or away on retreats, Piho also somehow finds the time to compete internationally in big wave SUP surfing.

She has entered events in Australia, and has also represented the Cook Islands last year in the world champs in Fiji.

She says this really took her out of her comfort zone, as the waves ended up being small, and all of her training is based around big wave riding.

Even so, she was still ranked 13th in the world for SUP surfing for females in 2016.

Confident in big surf, she is a bit of a Wonder Woman, and can hold her breath underwater for over five minutes. Very handy if pinned under a mountain of water.

“I’m not scared of size. If I can get down a wave on a board that will hold the wave, then I’m confident of going on anything.”

Piho is now aiming to compete in the Sunset Pro next February, she says, hopefully again representing the Cook Islands; and is also crossing her fingers there will be bigger waves this time round.

Additionally, she’s taught Dr Chris Brown, of Bondi Vet TV fame, and has showcased her skills on live breakfast TV with Channel Seven’s Grant Denyer, and Steve Jacobs in Sydney, and most recently in Rarotonga with Nine’s Natalia Cooper. She has made TV appearances on every major network in Australia as well as featuring in magazines such as Harper’s Bazaar, Women’s Fitness, Next and Good Health.

Back in Rarotonga, she says her Dad, Tuhe, is an amazing part of her retreat, “a humble, real island person, who has a lot of time, and a lot of good energy, love and support.”

He’s also the cook for the retreat’s meals from his Healthy Food Hut at the Muri night market.

“So when I leave here, I always leave my grandparents grave open.”

So when she travels the world riding monster waves or practicing yoga on her board in a far off land, they are right there with her in spirit.