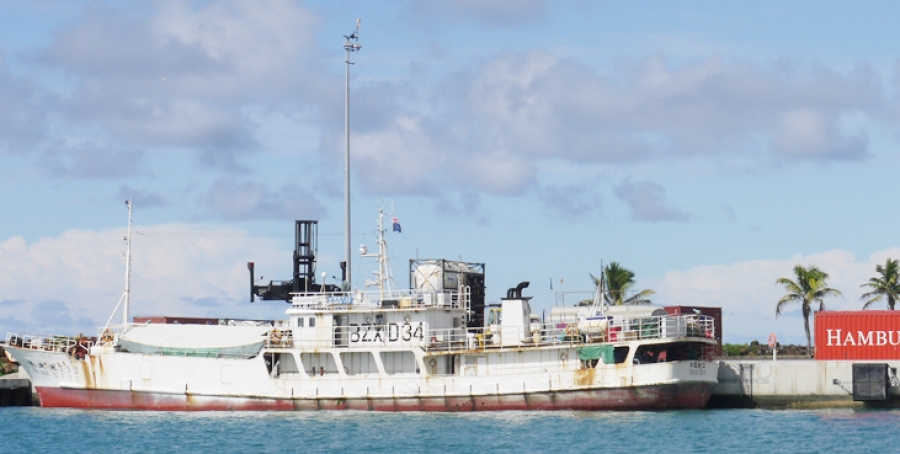 Huanan Fisheries Ltd is defending its operations in the Cook Islands by claiming it will be injecting $1.4 million into the local economy in 2014. Pictured here is one of the company's longliners. 14050703

A range of claims levelled against a foreign fishing company included in an advertisement carried out by local firm Ocean Fresh are unfounded and contain misleading information, says an official with the company.
Vincent Dong, the Rarotonga-based General Manager of Huanan Fishery (Cook Islands) Co. Ltd, was reacting to an ad placed in CINews last week by Ocean Fresh Director Bill Doherty.
In the ad, Doherty claimed the Business Trade and Investment Board (BTIB) had been instructed by the government to consider year-round, monthly offloadings of 50-70 tonnes of frozen fish by Huanan.
Dong said he was unaware of a “ministerial directive” as indicated in the ad, and denied outright the figures included in Ocean Fresh’s advertisement.
Many of the claims in the ad have also been refuted by the BTIB.
Dong also said Doherty’s suggestion that his company was using prison labour without pay and without proper equipment was false.
Workers from Rarotonga’s prison have been used to transport frozen fish from the wharf to reefers (refrigerated containers) – without working in freezers, as claimed - and receive a wage of $13 per hour, he said.
The BTIB has approved Huanan with a seasonal trading license, which allows the company to offload frozen by-catch during the peak tourism months from May to August.
According to figures provided by Dong, only five tonnes of frozen fish, mostly broadbill, was offloaded by the company during the months between March and August of this year.
In response to a query by Doherty on what benefits are gained by Huanan’s commercial activity, Dong said his company injects cash into the local economy through berthing expenses and costs incurred through the use of shipping containers, repairs, gas, spare parts, food, and local labour.
The company estimates to spend $1.4 million locally in 2014, he said.
Additionally, Dong said Huanan is a sponsor of local events and donates 100kg of fish to the hospital every time they offload in Rarotonga.
“We do think that we benefit the local economy,” he said.
Last week, the BTIB allowed Huanan to carry through with a one-time offloading of by-catch this month, and is expected to be the company’s final shipment of fish until March 2015.
Dong said the offloading has been requested by local retailers to help them meet demand.
In addition to its seasonal offloading of by-catch, Huanan is permitted to offload catches - permitted through its 15 fishing licences - year-round for export to foreign markets.