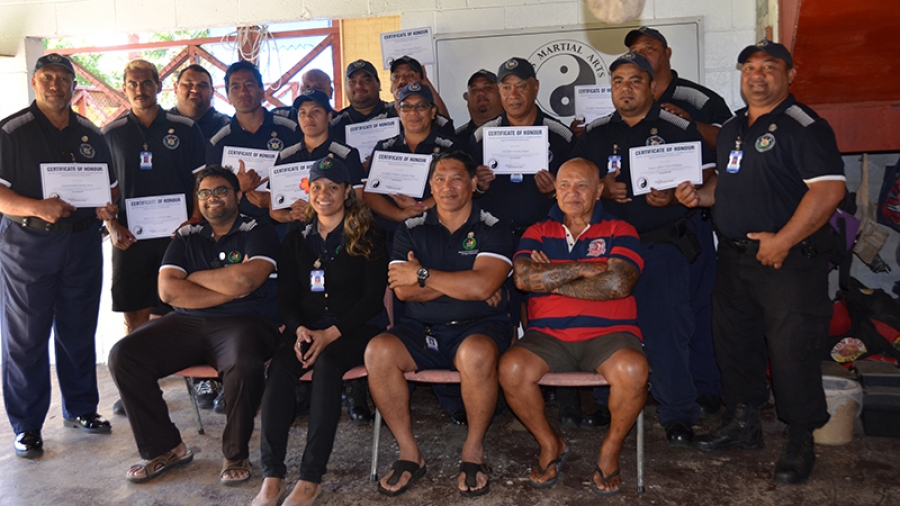 Prison wardens with their certificate for completing the Martial Art training with martial arts instructor Shihan Dan Turua (far right) and next to him is Secretary for Corrective Services Teokotai Joseph. 20101616

Prison warden Tepare Rongokea is encouraging youth to join Cook Islands Prison Services or Police if they are willing to put their hand up for their country.

Rongokea, 40, did voluntary work with the police service through the Blue Light Programme and also worked with community policing for five years.

Rongokea was one of the prison wardens who took part in training with martial arts instructor Shihan Dan Turua this month and hopes to be a training instructor at the Prison Services in Arorangi.

He says the training with Papa Dan is part of the prison officers’ rehabilitation programme with inmates.

They started the training two months ago where the officers were divided into two teams.

Prior to this probation officers also took part in the training.

He says the training is part of their physical fitness and this was the first time he had been part of such a programme.

And in the five months since being with Prison Services there have been no incidents where they have had to put their training to use.

“But as prison wardens we are preparing ourselves for the worst scenario that could happen,” Rongokea says.

The martial arts instructor explained that the course with the prison wardens is known as: “An elite close encounter tactical combat system workshop, that is set up for those in similar work fields such as police and security officers.”

He has conducted similar workshops with security officers in New Zealand and the Cook Islands Police.

“This is only to enhance their skills in controlling restraints against violent or very hard to control people, it is not about bashing them - just about trying to control them,” he says.

Prison environment can be a hectic place to work in, says Papa Dan, adding prison wardens need to know how to control a situation in a calm, harmless way.

The training is for the upskilling of the officers teaching them to be kind and patient. They also learn how to handle any situation and to manage their fear.

Married with three children, Rongokea comes from a family of police officers. Some of his family members also joined the New Zealand and Australian Defence Forces.

Rongokea says he wanted to work with Prison Services because he wanted to take his experience from the Blue Light Programme to prison and help with inmates, especially young ones.

“Our young ones, once they are out of prison, they have to make sure they don’t go back,” he says.

“I encourage the youth - prison is not the place for them. I am encouraging our youth to make the right choice and choose the right option, I encourage them to join the police force who are looking for new recruits, or join prison services.

“If you are willing to put your hand up to work for your country these are the departments to join.”