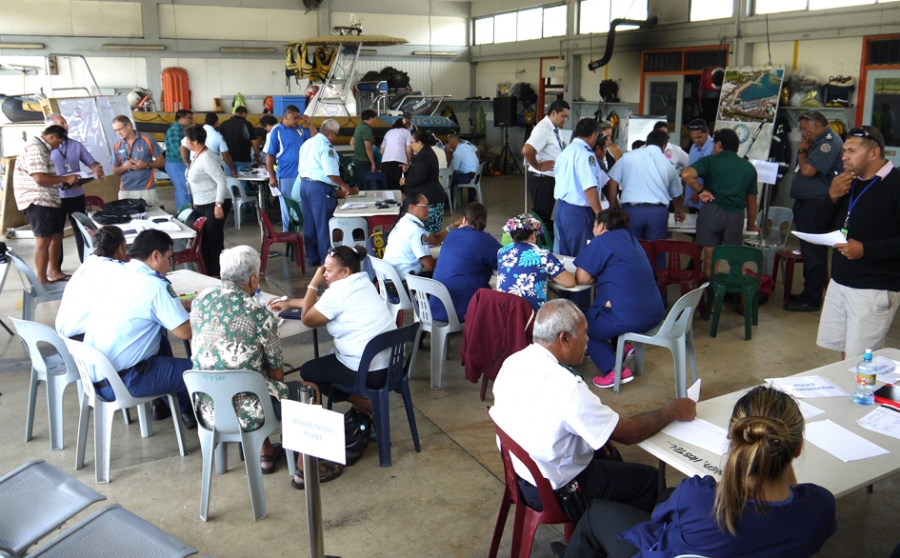 Local stakeholders participated in a mock emergency training exercise to bolster the nation's capabilities when responding to serious events. 14102919

Local stakeholders participated in a mock emergency training exercise to bolster the nation’s capabilities when responding to serious events.

A number of officials from various government agencies including, Police, Ports Authority, the Ministry of Health, Internal Affairs, Airport Authority, and Rescue Fire Service participated in the annual emergency planning exercise at Rarotonga International Airport.
Officials from Air New Zealand, Telecom Cook Islands, and Te Aponga Uira were also present.
Yesterday, those officials were forced into action through a mock scenario – the downing of an ATR-42 aircraft, which was said to have crashed at sea just outside of Avarua Harbour.
Following the experience of last year’s exercise, Deputy Chief George Nicholls from Rescue Fire Service said the focus of yesterday’s drill was about being able to come up with an accurate tally of passengers from the downed plane and delegating roles to various participants in rescue efforts.
“That’s one of the areas we lacked in last year,” said Nicholls, who also helped plan the exercise. “It’s also about putting in place a system so each agency knows their role.”
In such an emergency, Nicholls said officials would have to reconcile airline passenger lists with potential victims in hospital, rescue centres, and the morgue.
With the different members of the various agencies represented, Nicholls said: “It’s a matter of communicating and sharing ideas”.
“When it happens, they need to understand what to do,” he said.
Simi Teiotu, a staff member of the Airport Authority, was present at the exercise to act as a survivor of the crash, who had been in the water for 40 minutes and had been searching for his wife, who was also on the plane.
As part of the role and to add realism, he was expected to act in a “violent matter” while demanding the whereabouts of his wife.
“This is my part, and I’ll see their reaction,” said Teiotu.
This year’s exercise was planned by the Airport Emergency Planning Committee, which is headed by Chief Willie Hagai from Rescue Fire Service.