Celebrating Edward ‘Papa Ed’ Saul – a legend among us 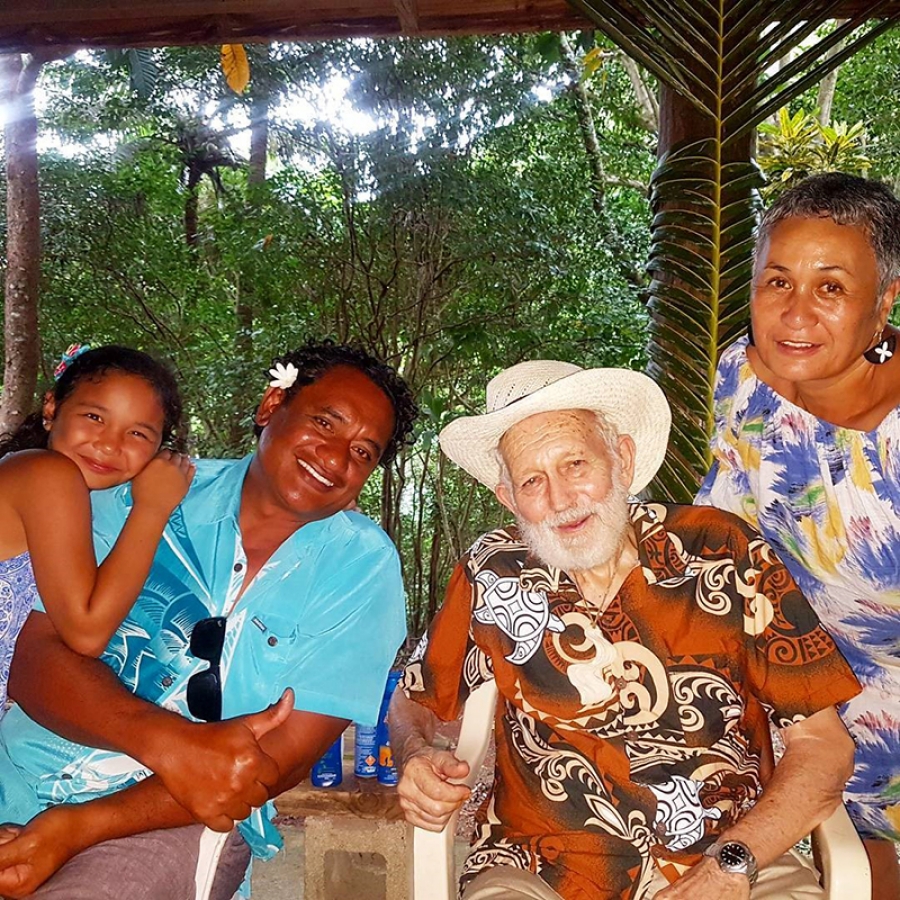 It was late in the afternoon when we started the climb up the mountains of Takitumu through a wide plateau of orange plantations.

After a fair distance inland, the road narrowed to a single track on the right side of the valley, wide enough for only one vehicle.

It was my first time here, and I was a little nervous viewing the steep drop through the Hilux’s passenger window, with our five-year-old asleep in my lap and our eight-year-old lounging in the tray of the truck.

For my husband Teina next to me though, this was a road well-travelled in his youth as an Environment Officer in the 1990s, assisting in the rat poisoning project to save the kakerori (Rarotonga flycatcher, Pomarea dimidiata), a small bird endemic to Rarotonga.

In our slow trek up the mountain, the road would widen in select spots just to constrict again, and we eventually passed a sign marking the Takitumu Conservation Area (TCA). After an extremely narrow bridge – where I was certain we would slip off into oblivion – we emerged at a shelter hidden away in the midst of a beautiful forest.

With the truck engine off, we were hailed by kakerori songs and moa kirikiri (fruit bats) flying overhead as the day’s light faded with the setting of the sun.

Edward Saul – Papa Ed – welcomed us into the TCA shelter with a big smile, delighted that his invitation had been accepted by our little family.

We were all there for a common purpose – to celebrate the 80th birthday of Papa Ed, a person whose efforts in bringing the kakerori back from the brink of extinction had touched the lives of everyone present.

I had heard of Papa Ed even before meeting him, through Teina’s stories of his time working at the National Environment Service (NES), when he and fellow co-workers Vavia Tangatataia, Ben Glassie and the late Aitua Kuro would hike up the mountain early in the morning to set rat poison.

Funny stories ensued. Vavia leaning tiredly against a rotten tree (after Teina and Ben had hiked around it) only to go tumbling down the mountain. Another about eating sandwiches prepared by Papa Ed from meats in the fridge – then one of the boys later discovering that rat bodies were also in there for preservation.

At Ian’s invitation, the floor was opened to those gathered at the shelter to celebrate Papa Ed and share their stories of how he influenced their lives.

Wayne spoke of an introduction to Rusty Nails (a mix of Drambuie and whisky) by Papa Ed, and handily produced a flask for a birthday swig in his honour.

Peter shared his stories of Papa Ed as a sailor, and humorously described his last sail, which sliced through a Sunburst boat bearing the Boyd kids in Muri Lagoon.

Kelvin spoke on behalf of Te Ipukarea Society and talked about how TIS and the Takitumu Conservation Area have worked hand in hand over the years. He also acknowledged the founding TIS members who were present to honour Papa Ed’s work, mentioning Papa Ed’s honorary Lifetime Membership of TIS. He then gave special thanks to Ian for his tireless preparations for this exceptional evening – especially clearing the track so we could make it up the mountain.

Jolene expanded on Papa Ed’s influence on TIS’s work, and said how it was amazing to see the gathering of people at this occasion, with special mention of the late Tania Temata.

Ana shared her experiences with Papa Ed and his late wife Maddie, and spoke of how his poetry influenced her to take up the pen.

Jacqui told of their interesting conversations at NES, which helped shape her Marae Moana work today.

Teina spoke on behalf of Vavia, Ben and the late Aitua, and acknowledged how Papa Ed had also shaped him and cultivated his interests in biology, starting up the ridge and ending permanently on the reef.

Gerald topped off the speeches, detailing how he has been affected by Papa Ed’s dedication to saving the kakerori.

Of most important note is that without Papa Ed’s persistence and tenacity over the past 25 years, the kakerori would no longer be in our world. His efforts at setting rat traps, laying poison and collecting data have been key at achieving an increase from as few as 29 birds to their current numbers of almost 500.

For me, it was surreal to be in the presence of such a legend. And to be in this magical, secluded valley, among those who were instrumental in founding a conservation movement in the Cook Islands that began with their common love for this little bird, was even more humbling.

Then it was our host’s turn to speak, Papa Ed firstly thanking everyone who was able to make it to share in the evening’s celebration.

He highlighted his NZ Maori and English ancestry, and how observing red-billed gulls on his decking after moving to New Zealand sparked a love of birds that lasted a lifetime.

In 1989, Ed chose to become involved in the Kakerori Recovery Programme that started in 1987, after a fellow told him he would be “studying the bird into extinction”. Right then and there he vowed to do whatever he could to ensure that would never eventuate.

Ed was also involved in the establishment of the Takitumu Conservation Area, which was declared in 1996 by the three landowning tribes of Ngati Karika, Kainuku and Manavaroa. The Kakerori Recovery Programme is one of the main activities of the TCA.

Continuing his talk, Papa Ed highlighted the challenges of obtaining funding to sustain the work, speaking of different funders and their expectations for the project to be completed in a year’s time, when this was a lifetime’s effort.

He generously thanked Teariki Rongo, who wasn’t able to make it on the evening, for his foresight when as the director of NES he worked with landowners to establish the Takitumu Conservation Area, without which none of Papa Ed’s work would have been possible.

Finally, he announced that he would bequeath his estate upon passing to the Friends of the Kakerori, a trust yet to be formed, to continue efforts to save the kakerori, a bird species that has meant so much to him.

Thank goodness the shelter was lit only by candlelight as the tears flowed freely from my eyes.

Papa Ed will officially turn 80 on February 5, celebrating among friends and family in New Zealand.

To support the Takitumu Conservation Area effort to save the kakerori, please contact Ian Karika at 55499 or email at birds@oyster.net.ck.

For more information and to support their work, please visit www.korerooteorau.org or email korerooteorau@gmail.com