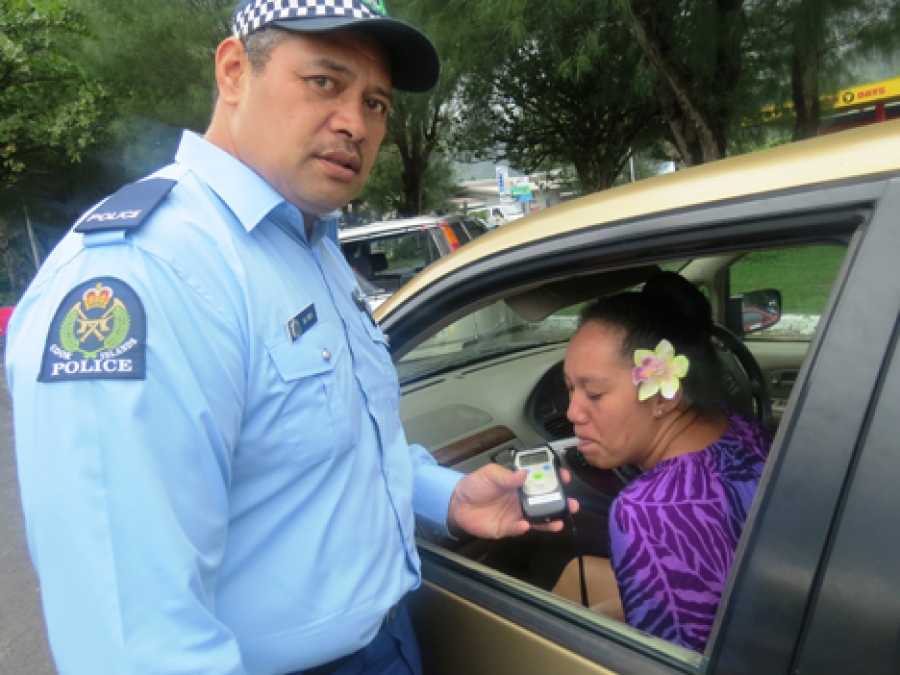 Constable Martin Iro demonstrates the use of a breathalyser in this photo, which was staged by the Cook Islands Police Service for CINews.

Cook Islands Police are asking locals to be extra vigilant in getting home from town following the cancellation of the midnight bus services last Friday.

They are warning locals and tourists alike to find other safe and legal means of getting home, or to be ready to face prosecution if caught drunk driving.

Inspector Solomona Tuaati says from a police perspective, there are concerns with the bus service being cancelled, because it’s a guaranteed way for people to get home safely.

“But it’s the people’s choice and if they don’t use it, we can’t make them. It’s their prerogative.” Tuaati says if the bus company want to cancel the service, that is their business, not the police’s. “There’s no point running a business if you’re losing money because people aren’t using it,” he says.

Last week, Cook’s Buses manager, Kevin Cook said that more visitors are renting cars and taking the risk to drive themselves back to their accommodation instead of using the bus service.

In response to this concern, Tuaati says police can’t do anything to stop this trend.

“We have noticed that there are more people choosing to rent cars and motorbikes, but we also think more people are choosing to have sober drivers instead of relying on public transport,” he says.

Tuaati responded saying that there are a number of initiatives and transport options for people and that police promote them all as well as monitoring drunk driving on the roads.

He says police do checkpoints all the time, and that they’re on the road 24/7.

“We advise people to not drive drunk, because if you’re caught there will be consequences, there’s no two ways about that,’ he says.

Anyone caught drunk driving is fined and disqualified from driving, and tourists must pay the fine before they depart the country, Tuaati says. As part of Road Safety Week, police will have an electronic sign to display their key messages at the Road Safety Council Booth in town. “We are strongly in support of the road safety council’s initiatives, says Tuaati.- SW