A woman of grace and faith 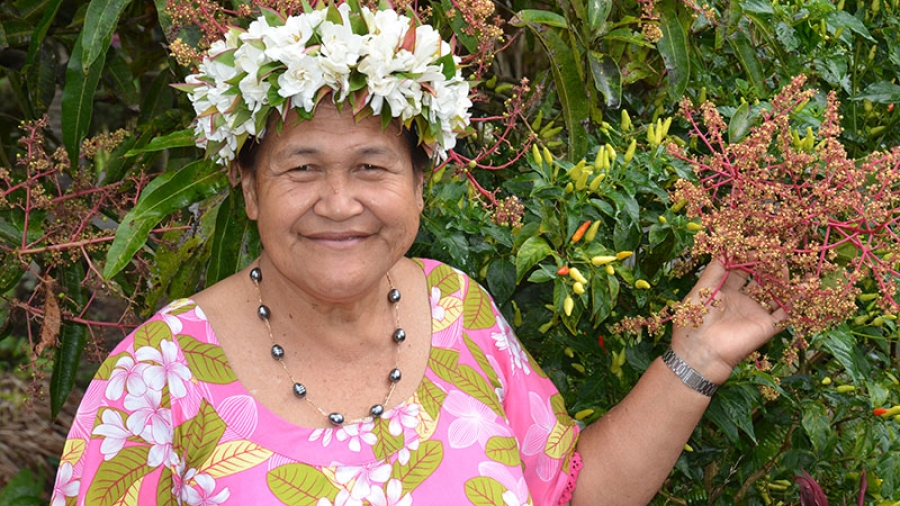 Vainetutai Samuela stands in front of her mango tree that has blossomed with flower seeds. 20091415

Vainetutai Samuel from Matavera, is a woman of grace who has great faith in the Lord.

She has been nominated as September’s ‘Woman of the Month’, a recognition that she is somewhat shy to accept.

Samuela raised her family toiling the land growing taro, a variety of crops and farming.

“Back then we didn’t need money to feed ourselves, we had different crops, grew what we could eat, went fishing putting out our nets at night, and we had pigs, goats, chickens…,” she said.

A memory she hasn’t forgotten was when she butchered a pig by herself – she cleaned, gutted and prepared it and cooked it in the umu.

“That was my first experience to prepare a pig on my own; I would watch my husband and the men to see how it was done, that’s how our life was, you just do it and help out,” she said.

Samuel loyally cared for her late husband at home when he became ill almost 28 years ago.

Born on the island of Mauke on April 6 1952, her parents were Kuravaro Atera nee Marona and her father Atera Apekore from the Akatauira family.

At six years of age the family moved to Matavera, Rarotonga to be with her brother Atera, whose guardian at the time, an uncle, had passed away.

She attended Ngatangiia School, her teachers at the time were the late Ata Piakura and Akaiti Ama.

In the early 60s when Matavera School first opened, she became a student.

“The head master at the time was Tautara Purea and my class teacher was Teokotai Areai.”

Samuel continued her education at Tereora College for only three years. She left to work at the UIT Store in town.

“When you are not very good academically, God has other talents, we have other skills,” she said.

On May 8 1971, she married Upokoina Samuel and when they started a family she quit her job to be at home.

“I was busy, I helped with the growing and farming. The men would dig the taro patch holes and we women would plant. That’s how exciting life was, doing things with the land, learning things…,” she said.

“It wasn’t easy, it’s hard work but God has blessed us. Look at today, when people have no work, there is the land to work on to feed you. If you don’t plant, where will you go when you are hungry, take from someone else’s plantation?”

During these Covid times, she wants people to go back to the land to grow and eat.

“The food is fresh and healthier; we have depended on food coming from overseas for too long.”

A devout Apostolic church member she was humbled to be bestowed with an elder title in the congregation while in Tahiti last year.

A woman with a big heart, she has always been active in the village, helping out when assistance is needed at working bees, vainetini, youth, sports groups, and schools.

She is a great cook and makes some of the best rukau, poke, chestnut and poke maniota that are sold at stores.

Samuel and her husband had seven children; sadly, a daughter passed away in 2016 after an illness.

She has 16 grandchildren and is happy to say her first great grandchild is “on the way”.

The ‘Woman of the Month’ run by Cook Islands Women will be held tomorrow at The Islander Hotel at 6.30pm. Bookings are essential, dinner and dessert is $25 per head; meals for children can be arranged. Call 21003 for your reservations.