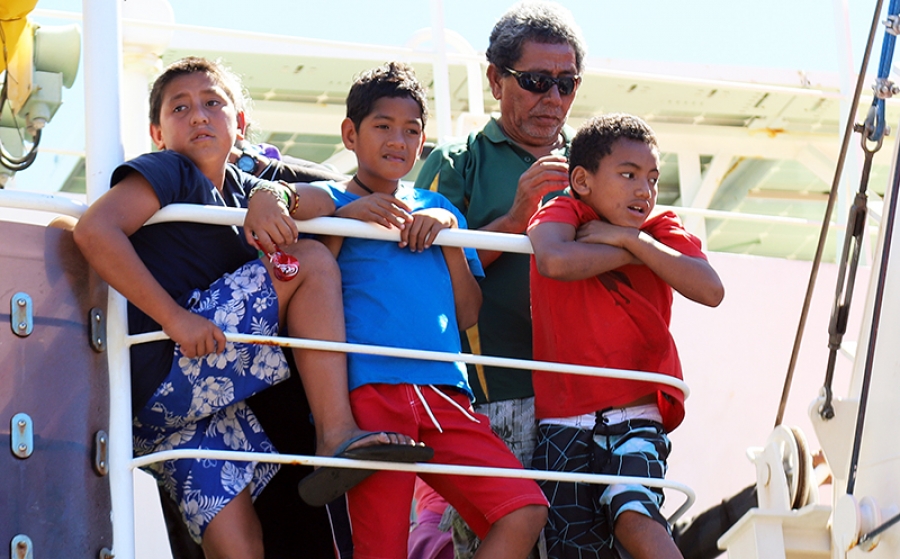 “Every year we export millions of dollars' worth of educated children. Those children were our future,” says outer islander Roger Malcolm. 18082304

Dear Editor, Utu Panu seems to have stepped into a hornet’s nest of loathing for the outer islanders.

She or he makes extremely valid points about the situation of the people left living in the outer islands.

I too have read and listened to the expressions of entitlement written by a few bigoted Rarotongans in your newspaper and in public.

Recently, McNair and Tuoro seem bent on bullying Utu Panu for having opinions and writing under a pseudonym.

If McNair and Tuoro need an outer island name to bash, they could use mine.

I totally agree with all that Utu Panu has written and am extremely happy that she or he has chosen to write about an issue that I have been feeling for some time.

I am also an outer islander, a papa’a, and have been living on Atiu with my Atiu family for 40 years. Maybe they could use this information in their next bullying letter?

I can add much more to this debate and I believe it comes from a real outer island perspective.

Much has been made by Wynne, McNair, Scott and many other frequent writers to the Cook Islands News about the current, seemingly unrepresentative number of seats held in parliament by outer islanders and there being a need for a change.

The main beef seems to be that some electorates have as few as 55 voters and some have more than 1000 voters. I couldn’t agree more that this distorts the representation, but I do not agree with any of the solutions suggested so far.

We in the outer islands mostly vote as groupings of families. We want an MP representative who is a part of our larger family group.

Rarotongans appear to vote the same way. If we accept this, then today, on Rarotonga, probably more than half the voters cannot do the same. They are the outer islanders living on Rarotonga.

They often have to vote for an MP representing a Rarotonga family that has no family connection to them at all.

This means that when they have a problem, who do they go to? Not the Rarotongan MP they voted for. It is almost always the MP from the outer island they came from. This MP is an MP they cannot vote for. For some their hearts are still in the outer islands.

Just before election day, outer islanders living in Rarotonga spend Bluesky and Air Raro dollars trying to persuade the few voters still in the outer islands to vote for the candidate they want, so desperate are they for an MP that represents them. Mostly in the end it is wasted effort and they remain unrepresented.

A better system would be to allow outer islanders with land and family connections in the outer islands the option to choose between being on the roll of their electorate in Rarotonga or the island they have land on and identify with.

I am sure this would even out the numbers of voters in each of the existing 24 electorates. End of that beef, but I am sure they will find others.

Another beef some of your letter writers keep spewing in our direction is that so few tax dollars come from the outer islands for the amount contributed.

Utu Panu explains this very well. He said it wasn’t always the same. In the past the outer islands contributed their fair share and unfortunately this all got spent on making Rarotonga a capital for the Cook Islands.

It is time for this to be turned around. It is payback time for the outer islands’ long one-sided tax contribution. Yay!

A further thought, statistics are often distorted because of omissions. VAT is collected and paid in Rarotonga on goods imported from overseas even when it is bought by or eventually destined for the outer islands.

In reality that tax was paid by outer islanders, not by Rarotongans, and should be included in the outer island tax statistics.

If you don’t believe this, take away the outer islands. Then they don’t exist. No more Air Rarotonga, Transam Shipping, Taio Shipping and Tiare Taporo. They too should be included in the outer island tax statistics.

While we are on the subject of air transport, let’s think of the Air New Zealand $12 million subsidy to support LA and Sydney air connections.

We have ignored the Tahiti air connection to Rarotonga. Who subsidises this? Why, it’s Air Rarotonga, and thus indirectly by airfares paid by outer islanders. In effect, outer islanders subsidise this link alone. More distortion in the statistics.

Finally in this letter I want to state the bleeding obvious.

Every year we export millions of dollars’ worth of educated children.

Each one is worth over a million in education alone, without even considering the food and shelter given to get them to a working age.

We even pay for them to go to job expos in Rarotonga and Rarotongans think they are doing us a favour. They helped build Rarotonga, not the outer islands.

Those children were our future. We are rapidly descending into islands of grandparents and grandchildren. Not far to total depopulation now.