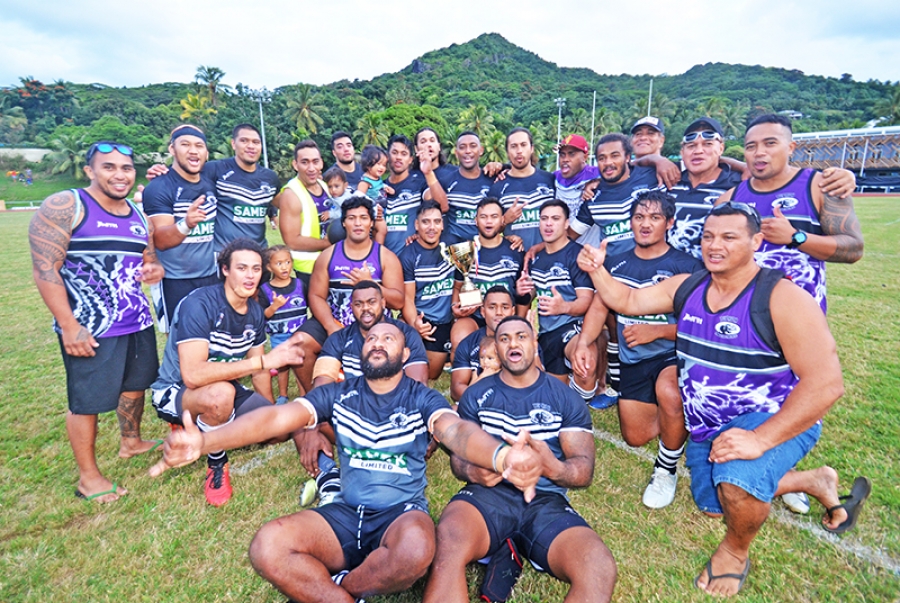 Tupapa Panthers after claiming the premiership title in the domestic rugby league competition on Saturday. The side defeated Ngatangiia Matavera Sea Eagles 26-24 in a close final. 18060306

It was so close. Just inches away from a fairytale end to what has been an incredible season for the Ngatangiia Matavera Sea Eagles.

But in the end, it was Tupapa Panthers’ day. They came prepared, they worked hard for it and deservingly walked away with the domestic rugby league premiership title over the weekend at the BCI Stadium.

The Darren Piri-coached side defeated the Sea Eagles 26-24 in a tough and competitive grand finale on Saturday.

The Panthers, who went into the match as the firm favourites after winning the minor premiership title, made a solid start with a well-structured play, allowing winger Eddie Nicholas to dive in the corner for the opening try to lead 4-0.

Sea Eagles bounced back minutes later, working through the middle to pave way for Usaia Sivo, who leveled the match with a try. Daniel Toa’s conversion saw the Sea Eagles soar high on 6-4.

Sea Eagles maintained the momentum and extended their lead to 10-4 after a try from the impressive Shaiquan Terekia.

The Panthers seemed to have lost a bit of momentum and continuous infringements from them allowed Sea Eagles to fly even higher after Toa’s penalty, extending their lead to 12-4.

After regaining control, rugged Panthers player Joe Vetaukula shrugged off some desperate tackles to cross the line and cushion the deficit to 10-12 at the halftime.

The Panthers started the second spell with another try from Nicholas, regaining the lead 16-12, thanks to the superb effort from Jamain Iroa, which kicked the conversion from an acute angle.

Tempers flared in the tense encounter, resulting in the sinbinning of two players – one each from both sides, as referee Tua Manea tried to keep the match under his control.

Being a player down did not affect the Panthers as they worked on their flanks again to allow Nicholas to dive over for his third try and extend their lead to 22-12.

Sensing defeat, the Sea Eagles brought back the dynamism that had propelled them into the final and it paid off with Dominique Noo getting a try in the corner. Toa’s successful kick saw Sea Eagles trailing at 18-22.

But the Panthers had better ideas and a brilliant solo effort from the player of the match and former NRL rep Sam Mataora saw the side extend their lead once again to 26-18.

Sea Eagles fought tooth and nail in the final 10 minutes and their relentless efforts saw Terekia score his second try, cushioning the deficit to 24-26 and bringing the match into an exciting finish.

Panthers defended valiantly, holding on to the slender lead to send their fans into a frenzy at the hooter, claiming the premiership title after a lapse of four years.

“It feels so great to win again. We last won this title in 2014 and hats off to the boys, they worked hard for this and they deserve it,” a jubilant Panthers coach Piri said.

“I would also like to congratulate the Sea Eagles; they played really well. It was a close game and they proved worthy opponents.”