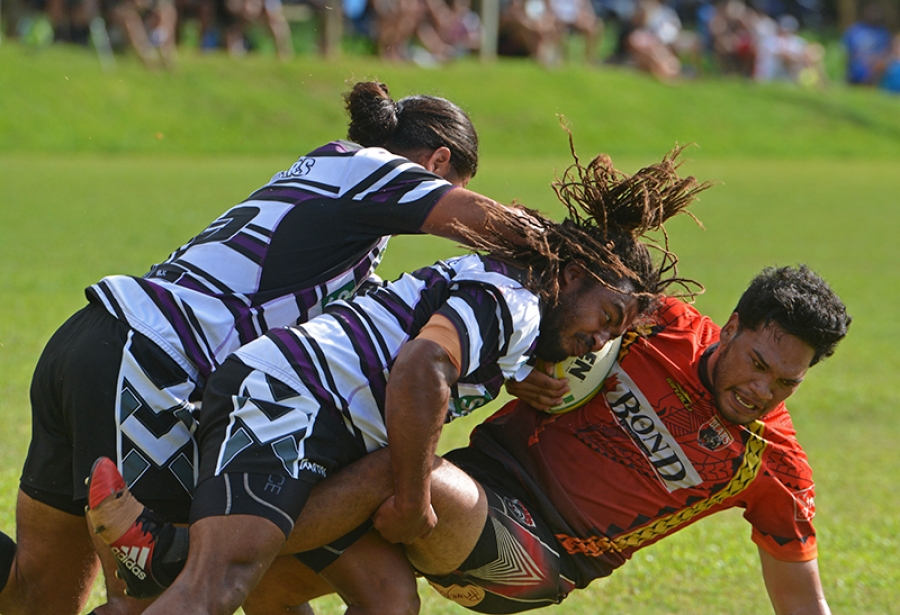 Tupapa Panthers defenders bring down an Arorangi Bears player in the feature rugby league match of round fi ve at Victoria Park on Saturday. The Panthers won 34-22. 19031047

Arorangi Bears’ unbeaten run has come to an end after the side lost to Tupapa Panthers over the weekend.

In the feature round five match of the Raro Cars Rugby League Competition 2019 at Victoria Park on Saturday, the Bears went down fighting 22-34.

The Bears who marched into the match with an impressive four match unbeaten run got right into the business from the opening whistle and took an early 10-0 lead.

The Panthers crawled back and managed to score consecutive tries to lead 16-12 at the break.

In a tit-for-tat second half battle, the home side extended its lead but was unable to hold it for long after the visitors managed to bounce back and level the match 22-all with about 20 minutes left to play.

Experience then proved the difference as a superior Panthers outfit managed to breakdown the Bears defence wall and scored two more tries to claim the 34-22 win.

The Bears tried hard to cushion the deficit but lacked the firepower they showed earlier in the match to get the important tries.

Despite the loss, the young side played with determination and courage, taking on the mighty Panthers who are the defending champions.

The Panthers finished strongly after a poor start in the match to get an important home win in the weekly competition.

The Sea Eagles are the only unbeaten team in the competition, after earlier overcoming the Bulldogs, Avatiu Eels and the Panthers.

The Bulldogs’ win against the hapless Warriors was their first for the 2019 season. The Warriors are the only team in the competition without a win.