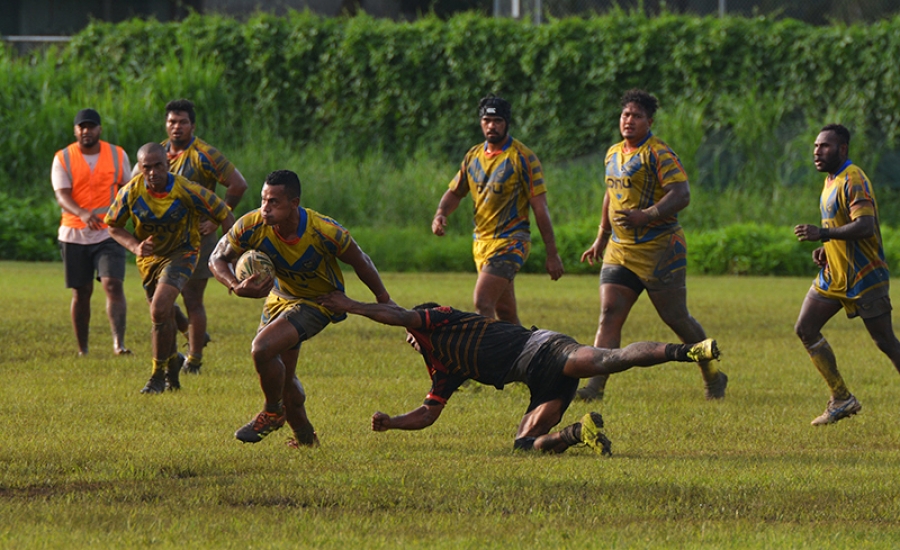 Avatiu Eels' Fale So'oalo tries to escape a tackle from Arorangi Bears player at The Swamp on Saturday. The Eels won 18-10. 20031504

Government is discouraging gathering of groups of more than 50 people, involving sporting events.

Cook Islands Rugby League Association will consider cancelling the rest of the domestic matches if the coronavirus outbreak continues to escalate.

There are no cases of Covid-19 in the country but government has stepped up preparation for “not if, but when” the virus arrives.

As part of the proactive approach, the government is discouraging gathering of groups of more than 50 people, involving sporting events.

Tai Nelio, league’s competition coordinator said: “If it comes to worst, CIRLA will cancel the rest of the rugby league games if enforced by government and authorities.

“This is serious and the risk of the pandemic spreading is high. So let’s hope it doesn’t enter our little paradise but for now let’s take heed of all the prevention measures and precautions given.

“What’s really annoying is the misinformation and fake news social media is spreading about this Covid-19. Which is the reliable source? Other countries rely on their government and authorities’ advice and so should we.

“I trust that our government and authorities are doing all their best and putting in place emergency plans to restrict this pandemic from creeping into the Cook Islands.”

Despite the growing fears, the Raro Cars Rugby League round six matches went ahead as scheduled on Friday and Saturday.

Avatiu Eels premier side maintained their unbeaten run after overcoming Arorangi Bears 18-10 in a close and fierce battle at The Swamp.

In the other premier match, Tupapa Panthers thumped Titikaveka Bulldogs 80-16 at Nukupure Park.

In the women’s competition, Country won by default after Town couldn’t field a full team. However some Country players joined Town and the latter won the match played at Teimurimotia Park 16-4.