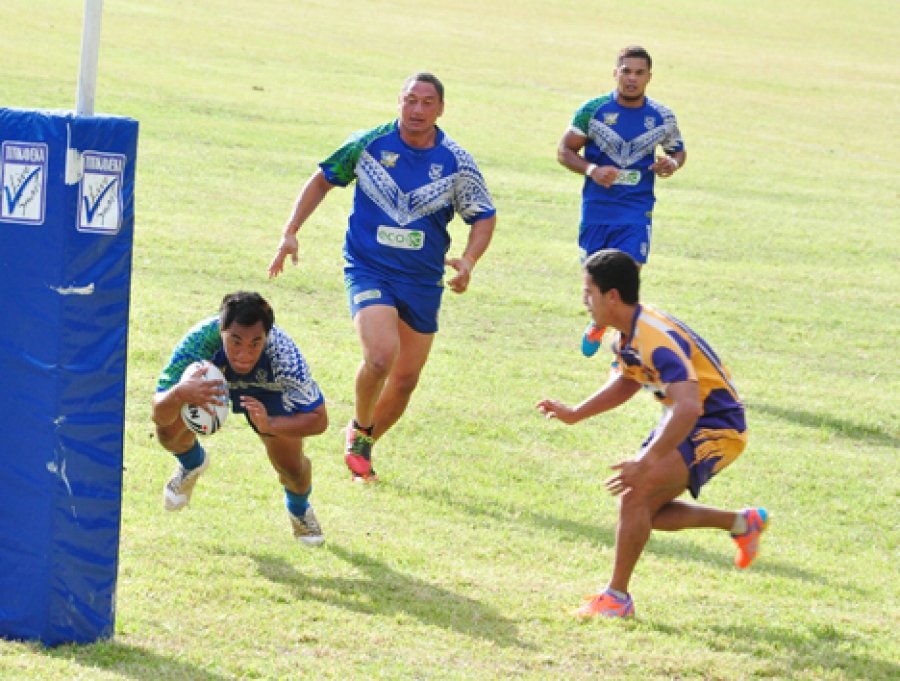 Mana Ngaau of the Titikaveka Bulldogs dives for the chalk to dot down the Bulldogs' first try against the Eels on Saturday. It was a nail-biting match that saw the Bulldogs outmuscle the Eels 16-12.

In a show of power the Titikaveka Bulldogs howled their intentions for this year’s league season when they outmuscled the Avatiu Eels on Saturday to win the fired-up encounter 16-12.

On Friday, defending champions the Tupapa Panthers were all class against a strong-starting Aitutaki Sharks to dispose of the visitors 46-28.

At the Happy Valley, the Arorangi Bears encountered a keen Takuvaine Warriors pack in a high scoring game that went the Bears way 48-34.

At the Tupapa Park on Friday, the visiting Sharks were threatening early in the match with a first-up try through Terei Charlie, followed by a penalty goal that gave the Sharks a 6-0 early lead.

However Panthers stalwart Turori Matutu quickly responded to close the gap to 6-all and open up the floodgates as the Panthers ran in two more tries including one from a brilliant solo breakaway by the ever-ferocious Eddie Marama to give the Panthers a healthy 16-6 lead at the half-time break.

An uncharacteristic error by Matutu was capitalised on by the Sharks, with big running impact player Mau George doing the damage to put his team back in the game and close the Panthers’ lead 16-12.

Once again it was the Panthers’ old heads who stepped up to respond, with Kore Herrmann busting across the line to dot down and once again open the day for two more Panthers tries to stretch their lead further to 34-12. The Sharks responded with two tries of their own to trail 34-22, with the final say on the field and scoreboard made by the Panthers with two more tries to seal the win 46-28.

At least 1000 spectators gathered at the Titikaveka field to watch what was expected to be an intense battle between the Bulldogs and visiting Eels.

The match was a nail-biting affair from start to finish, with both sides determined to showcase their skills and big hits entertaining the huge crowd.

A dust-up early on in the match added an edgy air to the match, however the Bulldogs kept their heads down and plugged away with a superb first-up try to Mana Ngaau settling the home side down.

Bulldogs fans gave the nod of approval to their strong Samoan imports, who were always dangerous with ball in hand.

Young rising stars from the Eels club held their own on the field, but the side seemed to be lacking bulk, with strong man Bilsy Gukisuva sorely missed in the low-scoring match.

The Eels’ supporters’ camp expressed their disappointment at the match referee who deemed a try by stalwart Clive Nicholas as a knock-on – a try that could have won the game for the Eels?

In the end it was the Bulldogs who had more to prove and they were rewarded with huge cheers for their efforts from diehard fans who certainly celebrated the 16-12 win like it was a grand finals game. But most importantly they can now see their strong Bulldogs pack have every chance of taking out the champions title.

Looking ahead to round five, the Warriors head to Aitutaki to meet the Sharks while the Panthers take the week off from games. The Sea Eagles and Bulldogs will meet in Ngatangiia while the Avatiu Eels will host the ravaging Bears.