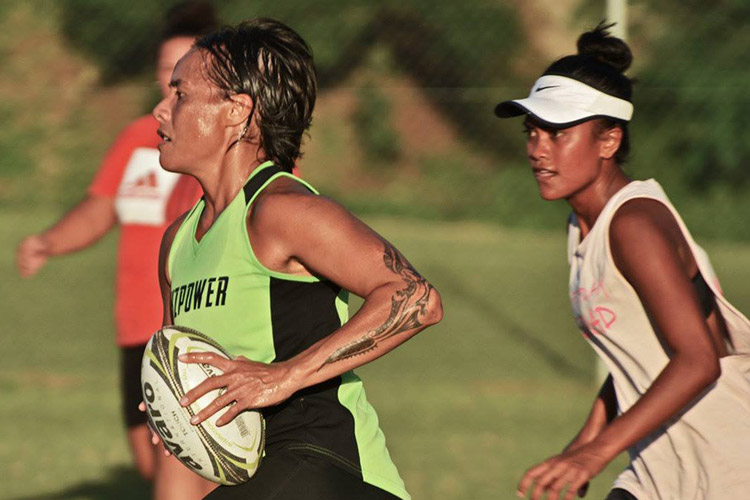 FBI maintains its lead in the Vodafone Women’s Touch competition after the latest round on Monday at Nikao Field.

The side took on newcomers Palmie Girls, who have a number of new and young players, in a well-disciplined game on Monday.

It was Palmie Girls that scored first catching FBI offside.

From the restart, FBI managed to string together a good set of drives and a quick offload from Poko saw some good hands to get the ball to their youngest player Nana Ngaroi to score in the corner.

FBI continued to play well with some great tries taking the lead into the second half.

However, in the second half, the Palmie Girls upped their game with their playmaker Greta Remuera running from dummy half a few times to set up tries for her team.

But the comeback from the Palmie Girls wasn’t enough to snatch the game from FBI who managed to hold on to its lead, winning by 6-5.

The second women’s game was between top side Nukz Power and Bounty Hunters in an intense game with both teams attacking and defending well.

It was Bounty Hunters that got on the scoreboard first but the mighty Nukz Power came back to equalise.

At half time, the score was 2-all.

The second half of the game saw the intensity from both teams lift to the next level. However, it was Nukz Power that held on with a dive from Chaz Makara to get up by one point.

A set play from Julz Westrupp with her link Cecilia saw Nukz Power seal the win by 4 touch downs to Bounty Hunters’ 2.

Despite playing earlier in the afternoon, the Palmie Girls worked hard against the fresh legged NIKS in the final women’s match on Monday.

It was later in the second half of the game that saw NIKS get the upper hand to take the lead and win 4-2.

Cook Islands Touch president Daphne Brown said: “Points began from second round games as this is when we started playing an odd number draw of five teams to avoid having a bye each week. One team plays twice each week.  We had a team pull out because it couldn’t quite get the numbers.”