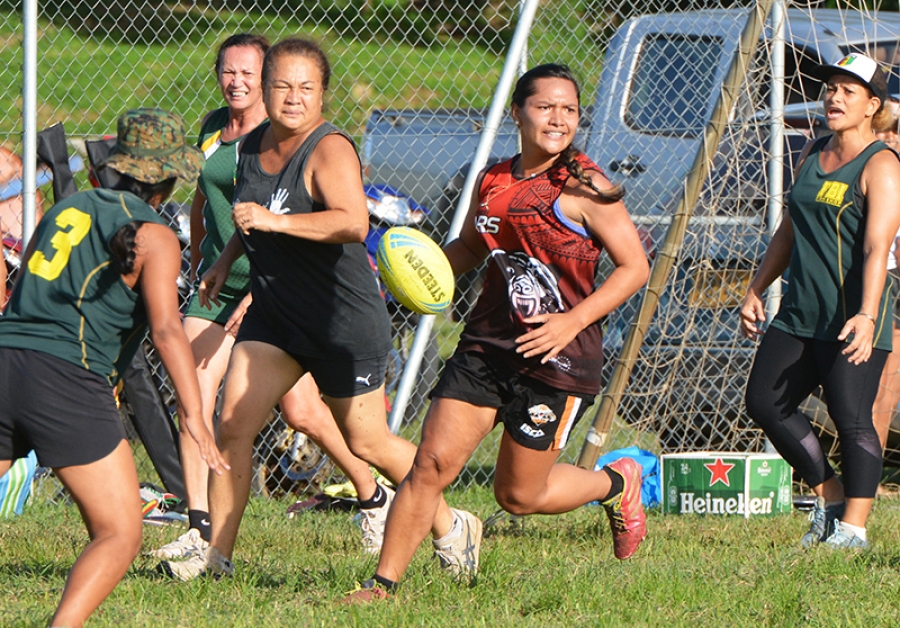 The 2021 Touch season kicked off on Monday.

Despite the rain the opening round of touch games ran well and the rain was well received by the touch fans who otherwise would have been playing in hot conditions at the Nikao field.

Teams were still moving the ball at speed and putting on the fancy footwork.

Both teams were evenly matched with experience and young blood.

Nukz Power got itself into a strong position early in the game and scored to put their team ahead but Team ATT found their rhythm and dotted down soon after to get on the score board and even the points.

Both teams worked hard on attack and defence and at times frustration crept into their game but the whistle blowers kept the hot heads in check.

The seven metre rule proving quite tricky for Nukz Power on defence from time to time. No doubt after a few games under their belts all teams will get the hang of it.  The game finished with a three all draw.

The next men’s game was between regulars Germinators and newcomers Patriots.

These two men’s teams threw everything at each other in an entertaining horse trading game of tit for tat touchdown.

It was also a test game of the new rules getting used to some of the referee calls.  The game ended in a five all draw.

The last game of the night was between Touchya and GAT. Touchya proving too strong for GAT.

The women’s competition is promising some close games.

The teams are strong and evenly matched with perhaps experience being the deciding factor.

Newcomers Palmie Girls is a young, exciting and speedy team and under the guidance of former national rep Spoon Marsters this is the team to watch out for.

The first women’s match was between two touch regulars Bounty Hunters and FBI.

Both teams have had an overhaul bringing on board more youth and new players into their teams with a couple of experienced players. Both teams played with flair proving the confidence gained by the youth players to lead the set team plays from their Cook Islands Games experience.

However, both teams will need to work on finishing their plays to get points on the board.  Both teams were solid on defence but it was FBI that finally broke through the Bounty Hunters’ line to score the only touchdown of the match.

The women’s game of the night was between a new look, not just in uniform but also young players, Nukz Power and newcomers Palmie Girls.

These two teams showed they are looking forward to developing their players for the 2022 Cook Islands Games to do their respective islands proud.

These two teams nutted out the 30-minute game but Nukz Power had the experience of family duo niece Rima Browne and Aunty Julz Westrupp, who guided the Nukz girls around the field with their structured game plan.

Some great plays were seen with a couple of diving tries by young Alma and excellent exits from from Nukz Power to gain rest and recovery time.

The Palmie Girls impressed with their speed and skillful passing and will certainly improve as they get better understanding of the touch game.

The Vodafone Cook Islands Mixed and Under 16s competition gets underway today.