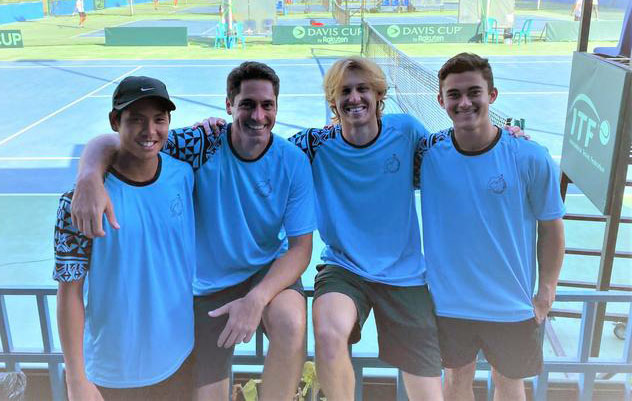 The Pacific Oceania men's tennis team is full of confidence heading into this week's Davis Cup meet in Jordan.

The regional team won promotion to Asia Oceania Group three two years ago but last season's competition was cancelled because of Covid-19.

Brett Baudinet from the Cook Islands said all four players are looking forward to representing the Pacific on the international stage.

"We were all pretty bummed that we missed out last year so pretty exciting this year that it's on," he said.

"We're super keen to get out there - I think we've got a good chance this year to do really well. The team's fit, the team is ready so we're ready to go."

Colin Sinclair from the Northern Marianas is the highest ranked player in the team at 735 in the world.

He's been busy playing in Europe and last week competed in his 16th tournament of the year in Romania.

The Pacific Games gold medallist has won 10 of his 11 Davis Cup matches since his debut in 2017 and is excited to welcome newcomers Clement Mainguy and Heimanarii Lai San into the team.

Vanuatu teenager Clement Mainguy previously competed in the Junior Davis Cup and recently started a tennis scholarship at Youngstown State University in the US.

"In my head I was like one day I'm playing the seniors and now obviously I'm here now and very excited to be with these guys," he explained.

"Brett has played quite a few times already and Colin as well. I'm just really excited to play with these guys and hopefully we will do well but we're all fit and ready to go."

The 18-year-old is following in the footsteps of his father, Oceania Tennis President Cyrille Mainguy, who represented Pacific Oceania 25 years ago.

"Well of course he supports me a lot but he knows that this is my time and not his (laughing). He's just really happy for me, and very excited," he said.

"He was telling me if he could come he would have, but I think he's just happy for me and a bit proud. Hopefully I'll play good here and just make the whole country and the whole family proud over there."

Tahiti's Heimanarii Lai San was a late call-up to the team, following the withdrawal of Papua New Guinea's Matthew Stubbings.

The Anderson University Junior flew from the United States to represent Pacific Oceania and is embracing his opportunity.

"I was on holiday in Bora Bora at the time they called me, so I was not expecting it at all, but obviously it's very exciting to be part of this team," explained the newcomer.

"It's something very new and it's like a huge honour for me to be able to represent my country in this team. Obviously I will give my best in this week and I will try to do well...and just try to give it all for the team."

Nine teams are competing in Group Three this week, with Pacific Oceania drawn against Vietnam and Qatar in pool play.

The top two teams from each of the three pools will play for promotion to Asia Oceania Group Two in 2022, and Baudinet said their goals are simple.

"The expectation this year is to bring our Pacific mana back out again," he said.

"I think we're all very confident this year that we've got a good chance of moving up to Group Two so I think everyone here is prepared to step up this year and really take it to them."