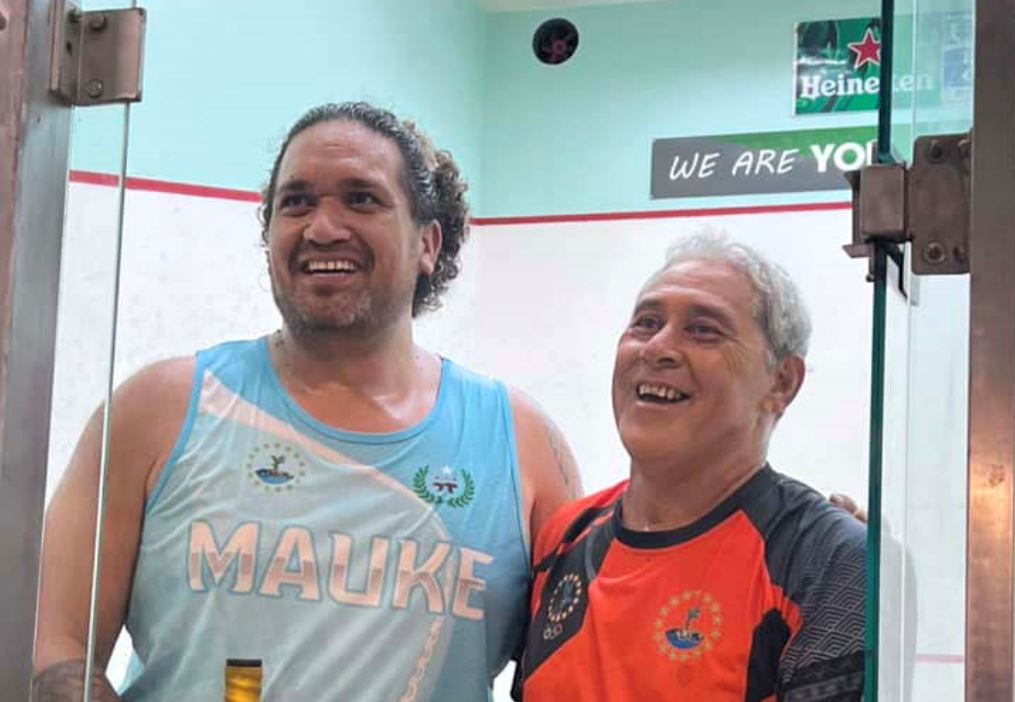 Squash is enjoying a renaissance with the sport being included for the first time in the Cook Islands Games, drawing out legends of the past, launching future stars, and hosting visiting squash players at the recent Cook Islands Squash Open.

And now the squash committee is preparing for its third major tournament in the Cook Islands Squash Nationals this month with high expectations of the best of island squash on display.

Ten island teams took part in the Cook Islands Games tournament fielding a team of four men and four women who played their squash individually, with points gained pooled together for an overall team result.

Squash legends were drawn out of “semi –retirement” not wanting to miss out on the first ever squash tournament in the Cook Islands Games although it was always part of the former Tumutevarovaro Games.

The likes of Ianis Boaza of team Atiu, Henry Iripa of team Mauke, Tui Tuakeu of team Aitutaki and even New Zealand based squash players such as Simon Allan for team Mangaia laced up for a diverse tournament.

Although they returned to the courts with some “aging” doubts on their minds the legends all inspired proving their return is like riding a bike – you never forget.

Budding and developing squash players were also in the mix in the likes of New Zealand based squash sisters Teremoana and Porohu Maoate in team Rakahanga while beginner squash players braved moving from the social circuit to competitive squash and loving the move.

Rarotonga and Pukapuka fielded a team of mostly first timers and brought some raw talent and flare to the squash courts.

In the end – there could only be one gold medal winner in each of the men and women’s division.

In the women’s division – it was the silky experience of Kathy Numanga-Wearing, Catherine Ben-Nicholas, Bernadette Raffe, Edwina Carlson and Julia Kapi who took out the top honours of winning the first Cook Islands Games squash gold medal.

Silver went to the bright ladies from Aitutaki made up of Anita Boaza, Anne King, Maria Harreguy and Mary Ann (Shana) Kamana.

In the men’s division – superb squash players Robert Pareanga and Christian Mani led the way for their ‘legends’ team which included Henry Iripa, Jason Pierre and Okirua Teokoitu to take out the gold over team Rakahanga who settled for silver medal and were led by top squasher Marlon Manlangit and Russel Thomas, ably supported by Clifford Atuatika and young Pae Puna.

Congratulations to the ten island squash team that brought colour, flare and fun to the first ever Cook Islands Games squash tournament.

Proof of the revitalisation of the sport was seeing many of the Cook Islands Games players sign up for the Cook Islands Squash Open – the first since the lockdown in 2020 drawing with over 50 international squash players and their support crews to join a 30 strong contingent from Rarotonga with a total of 84 players.

International squash players included social players and some of New Zealand’s hottest rising squash talents – some visiting for their tenth plus time and others coming to Rarotonga for the first time and vowing to make it an annual pilgrimage.

Visiting squash players not only enjoyed the challenge of playing island style squash but were giving and generous in sharing their skills and encouragement to local players.

Despite the best efforts of the local based players – the tournament was taken out by New Zealand rising squash couple Glenn Templeton and Winona-Jo Joyce with second place also going to squash couple Te Aorangi Murphy-Fell and Lauren Clarke and these are names to watch in New Zealand squash.

Growing the sport of squash through more regular tournaments is one of the core goals of the Cook Islands Squash committee.

Anyone interested in starting squash, becoming a member and playing more regularly can contact the Cook Islands Squash committee via email on squashcookislands@gmail.com or just rock up to the squash courts at the multi sports complex in Nikao where you will find the squash enthusiasts pushing each other to be better players – come join the fun! --Paporo aka-paru