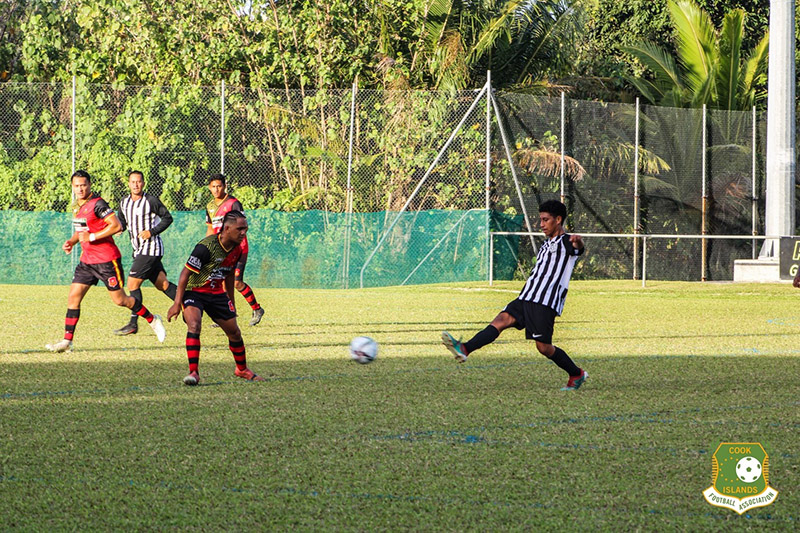 In the Tower Insurance premier men’s match on Saturday, Tupapa found their usual style of playing and used it to secure their 2-0 win against Puaikura at CIFA Complex in Matavera.

A throw in on Puaikura’s half in the fourth minute of the game found Anthony Samuela whose attempt at goal got deflected by Puaikura’s defense, making its way through to Tupapa striker Paavo Mustonen who slammed in the opener to give his side a 1-0 lead.

Puaikura found their first big scoring chance in the seventh minutes as David Davida found himself in front of the box with an open shot, but Tupapa defenders snuffed out his chances at a goal.

After a relentless effort and some desperate defending, the determined Tupapa Maraerenga side managed to score their second goal in the second half of the match. The goal scoring machine Paavo Mustonen was too swift for Puaikura’s stopper Mel Oti who just missed the chance at sweeping the ball before it reached the back of the net.

On the other pitch, village neighbours Titikaveka FC and Nikao Sokattak FC played a well fought battle which ended in a 1-all draw. Avatiu premier men’s team got back into their groove on Friday winning 1-0 against Matavera FC.

In the Islander women’s division, Puaikura youthful ladies had the Tupapa women’s team on high alert in the first half. Table toppers Tupapa who held possession of the ball and made many attempts at goal found it hard to put the ball through pass Puaikura’s backline.

After a continuous contest for a goal, Puaikura’s speedster Nikki Smith managed to beat Tupapa’s strong backline and slipped through a nice ball right through the hands of Tupapa’s goalkeeper.

With Puaikura taking a slender 1-0 lead, Tupapa’s frontlines Kuramaeva Tare and Adriana Hauser made many attempts for a point but a blunder in front of the 18-yard box gave Tupapa a freekick in the last minute of the game. Tupapa veteran Elizabeth Harmon stepped up and scored, ending the match in 1-all draw.

In the other women’s matches, Titikaveka and Nikao Sokattak battled tooth and nail but couldn’t manage to get through any goals, ending their match at nil all. Matavera’s women’s team have been on a roll with their wins since their upset against Avatiu in a catch-up over a week ago. They again enjoyed their 4-0 win against Avatiu on Thursday.