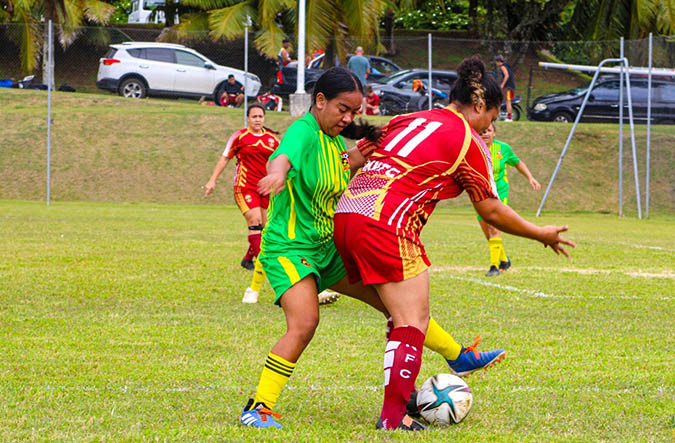 Nikao youngster Tarani Omao tries to get the ball off a Matavera player. The match ended in a 1-all draw. CIFA MEDIA/ 21091203

Nikao Sokattak extended their unbeaten run in the Tower Insurance premier men’s competition after beating Matavera 3-0 at home on Saturday.

Nooti Peau scored the opening goal for Nikao in the first spell, putting the ball into the back of the net with a header, from a corner kick.

Both sides had spells of possession with some half chances which went mostly in Nikao Sokattak’s favour.

Matavera’s backline were kept on their toes, taking on Nikao forwards who were furious in attack.

Wasting no time in the second half, Nikao’s strikers and midfielders showed neat footwork and set plays, before lofting a fine shot past Matavera’s stopper to extend their lead to 2-0.

Nikao maintained their tireless effort and were rewarded with their third goal to win the match 3-0.

In the Islander women’s match, Nikao youngster Tarani Omao gave her side 1-0 lead after scoring the opener 20 minutes into the second half, against Matavera.

With about 20 minutes to go in the match, Matavera’s midfielder Kimberly Uini equalised. The match ended in 1-all draw.

Tupapa Maraerenga thumped Titikaveka 3-0 at CIFA Complex while on Thursday, Puaikura and Avatiu match ended in a 1-all draw.

The grassroots catch up games for round two will be played today at the CIFA Complex in Matavera.

Spectators and players are asked to tag in or sign in before entering the complex.