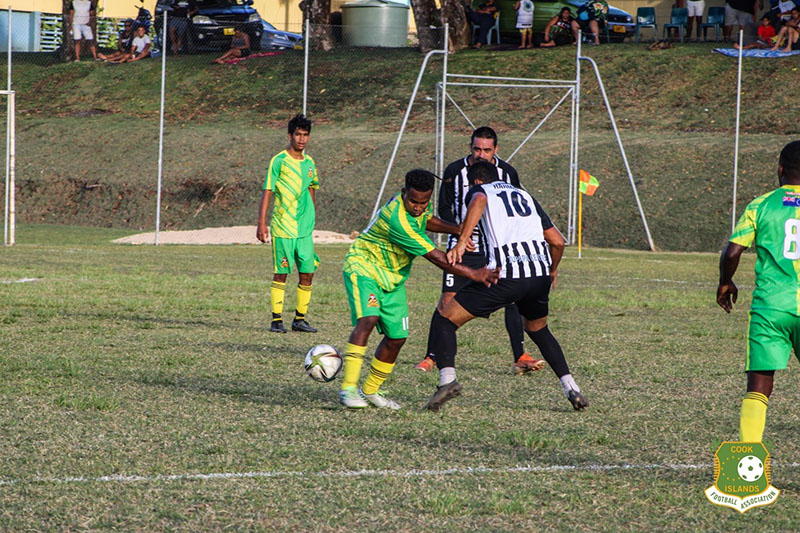 Nikao Sokattak have taken the lead in the Tower Insurance premier men’s division after a huge win over the weekend.

At Nikao Field on Saturday, a determined Nikao Sokattak overcame defending champions Tupapa Maraerenga 2-1 in the feature match of the round.

With both their goals scored in the first half of the match, Nikao’s youth players stood out against an experienced Tupapa outfit.

Nikao’s Toru Mateariki used his speed to break through Tupapa’s defence line to score their first goal. He also provided an assist with a through ball to his team mates Jack Poiri and Nukuiva Tetava, who extended their lead to 2-0.

Despite boasting many chances at goal, Tupapa found it hard to execute them – the skills and structure were there, but they had trouble in finishing.

Coming out sturdier in the second half, Tupapa aimed to dominate possession and Tupapa’s Grover Harmon pulled one back for the side after slipping the ball past the Nikao goalkeeper.

However Nikao held on to the slender lead, winning the intense match 2-1.

In the other premier men’s match, Matavera caused a major upset after beating Puaikura 1-0. In the mid-week match, Titikaveka thumped Avatiu 7-2.

In the Islander senior women’s game on Saturday, Tupapa and Nikao put up a grand fight, both with a strong defensive play and quick in attack. But Nikao’s minor errors set them back, providing Tupapa with two penalty kicks, one in each half. Tupapa veteran Elizabeth Harmon took no chances, converting both penalties to win 2-0.