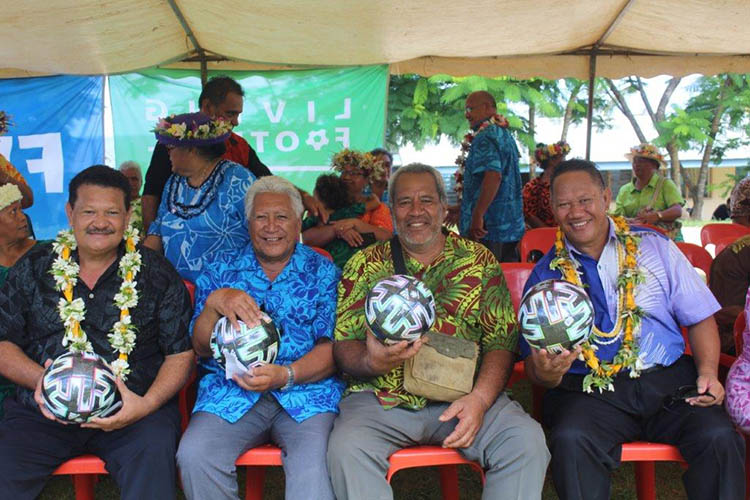 A historic moment for Mangaia Football took place on Friday February 5 in Oneroa with a ground breaking ceremony which marked the commencement of the construction of the Mangaia Football Association soccer field and facilities project under the FIFA Forward Programme.

The field will be the focal point for all football activities, programmes and competitions on the island of Mangaia, and most of all will be a major benefit to the students of Mangaia High School.

“I would like to thank the Aronga Mana of Mangaia, Mayor Makitua Tutai, Numangatini Ariki Tangi Tereapii, the President of Mangaia Football Association and his Executive Committee for the work done in securing this land for Football,” Harmon says. Harmon also pointed out to all those present at the ceremony how this project came into existence and the vision he had for football, the students of Mangaia School and the people of Mangaia.

“It was back in 1998 when I visited Mangaia that I saw the distance the students at Mangaia High School had to walk to get to the main field in Oneroa to play football and other activities. My heart felt for the children and from then it was a vision and goal of mine to establish a soccer field close to the school for the children of Mangaia,” says Harmon.

Harmon also mentioned that there are two important things he would like the Mangaia Football and the people of Mangaia to do.

“Firstly to use the complex as often as you possibly can; and secondly, you must look after it, if you don’t eventually you won’t be able to use it,” he said.

“Cook Islands Football Association would like to thank and express our gratitude to FIFA and its President Gianni Infantino for granting funds to construct the project under the FIFA Forward Programme.”

Numangatini Ariki Tangi Tereapii, also a former CIFA Vice President, conveyed his appreciation and gratitude to CIFA President Lee Harmon for having the vision to construct a football field for the people of Mangaia, in particular our children of Mangaia. Numangatini Ariki went on to thank the Aronga Mana for working together to support this project and make this vision a reality.

Harmon confirmed also that this is just the first phase of a three-phase project to be implemented in Mangaia.

To wrap up the historic event, those who attended were treated to a big feast hosted by the football clubs on the island.