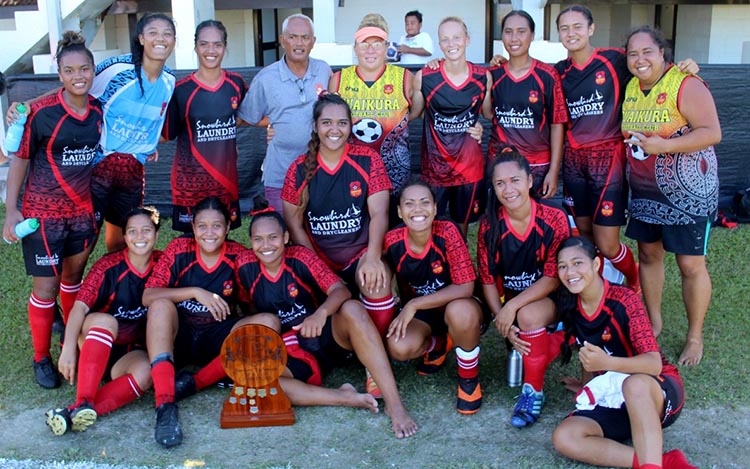 The Puaikura women’s team after winning the Round Cup and Knockout Cup final. CIFA Media/20121306

However, the tournament has not been finalised by the regional body due to Covid-19 pandemic.

According to Pauline Dean, Cook Islands Football Association’s competition and club licensing manager, they are looking forward to sending national teams to a number of regional events in 2021 but are waiting for the final dates.

“The biggest one for us will be the World Cup Qualifiers for the FIFA World Cup, Qatar 2022 that OFC is yet to confirm, i.e. competition dates and venue.”

The pandemic had affected the national teams’ participation in a number of tournaments this year.

Dean said: “Internationally, there was an impact of Covid-19 with CIFA to host the Nations Cup Qualifiers where Tonga, Samoa and American Samoa was to travel to the Cook Islands to play our national side.”

However, the Covid-19 pandemic had little to no effect on the local competition.

Dean said the 2020 season went really well and all Rarotonga clubs were involved.

“Locally, there was an impact on the clubs who were unable to commence training in preparation for the season earlier in the year due to Covid-19.

Dean said the domestic competition went on a two week break for the Cook Islands Games.

“We had to stop for two weeks to allow the Cook Islands Games to be played as football was part of the competition which I believe impacted a lot on the players themselves having to play a lot of football before the games.

“During the games and the catch-up matches after the Cook Islands Games, you would see a lot of fatigue and injuries that players encountered.”

Puaikura women made a clean sweep winning the senior women Round Cup and Knockout Cup titles.

In the men’s Knockout Cup, Nikao claimed the title after overcoming arch-rivals Tupapa 2-1.

“Congratulations to all clubs who have claimed the 2020 Round Cup titles in the respective divisions and the CIFA Knockout Cup titles, we look forward to 2021,” Dean said.

“It is good to see this (new champions) as it shows that the football competition is alive and well and competitive at senior level. From our president, Lee Harmon, executive board members, staff and all our island associations and clubs, we would like to wish everyone a Merry Christmas and a Happy New Year.”