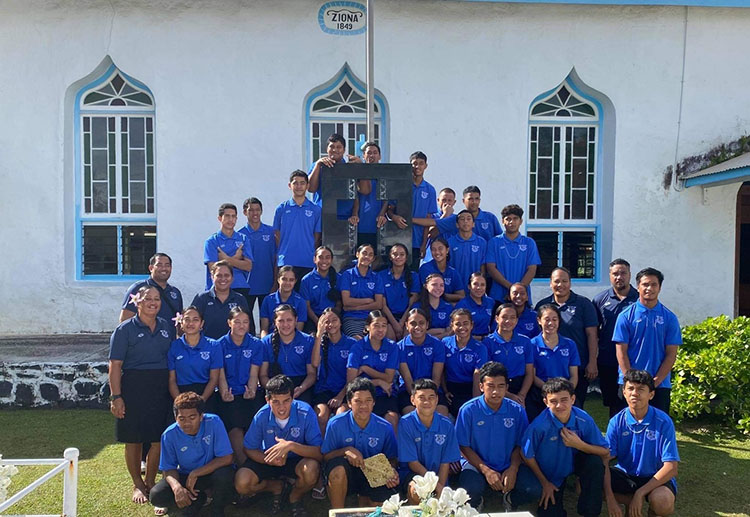 Cook Islands Football Association under 15 boys and under 16 girls teams attend church with their coaches and team officials on Sunday. CIFA MEDIA/21071410

Budding Cook Islands footballers have an opportunity to shine when they land in Aotearoa New Zealand for a week long intensive training programme.

Cook Islands Football Association (CIFA) under 15 boys and under 16 girls development squads are scheduled to depart Rarotonga tomorrow for Auckland where they will take part in CIFA’s elite player development programme.

The teams consist of players from Rarotonga with a few selected from the outer islands who were identified during the recent Kia Orana Youth Football Festival.

The under 15 boys team is coached by CIFA technical director Tahiri Elikana alongside CIFA development officer Anthony Samuela, while CIFA women’s development officer Tupou Brogan-Patia will lead the U16 girls team with the assistance of Matakeu Katuke.

Seeing as there is now a quarantine-free travel bubble between the Cook Islands and New Zealand, CIFA president Lee Harmon said the programme was as an opportunity not to be missed.

“With borders being closed and travel restrictions around the world due to the Covid-19 pandemic, we are grateful for this opportunity to be able to travel,” Harmon said.

“The teams have been training for the past three months and we see this as an opportunity for our players to continue on with their personal football development.”

Elikana said it was a great opportunity and a privilege for up and coming Cook Islands representatives to develop and gain experience.

“President Lee Harmon was the driving force behind the initiative because without this initiative our player development programmes would suffer.”

They will play their first match against Papakura City Football Club at McLennan Park, on the July 19.

Before returning home and wrapping up their tour, Arawhiti Maori will play the under 16 girls, before Pounamu Maori take on the under 15 boys.