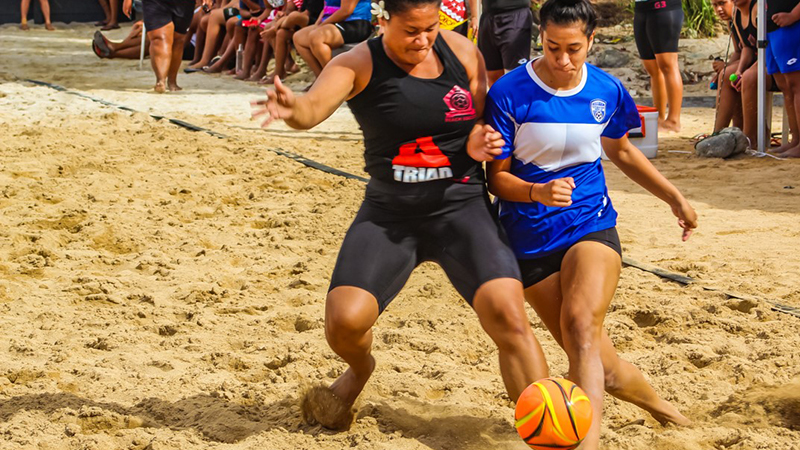 Tough battles are expected in the 2021 Beach Soccer Championship as teams vie for top finish in the final rounds.

On Wednesday afternoon, the Nikao Beach Courts was buzzing with activity when the CIFA Beach Competition entered day four.

Kicking off the men’s games, PFC Guyz faced off with Matavera FC in what was a very close game.

Starting off with a spectacular goal from PFC Guyz saw the game start to take motion in favor of PFC. Not too long after Matavera equalised, tilting the balance of the game towards Matavera.

A slight error from the PFC goalkeeper saw Matavera strike another ball in the back of the net giving them the two goals they needed to ensure their win.

Nikao Sokattak continued their winning streak after they defeated the young PFC Boyz 7-0.

The MC Stallions tried hard in the second half to get the equaliser but the Wolves had the last laugh, winning the match 2-0.

The final game of the day saw Titikaveka Blue Ballz and Wantoks enter the pitch with Wantoks taking the lead with a goal from kick off.

However, the Titikaveka side was not willing to give up easily as they went on to not only equalise but score two more goals to give them a secured lead against the Wantoks.

Time was of the essence and Wantoks made sure to not waste any opportunities given to them, equalising the match 2-all. It was anyone’s game at this point. Wantoks found the first glimmer of hope and made good use of it before slotting another goal to win the match 5-3.

The open women’s division saw The Vibers take on PFC Galz in the first match of the day. The Vibers defeated the young PFC team 4-0.

Next up was the PFC Maidenz, who faced off against top of the table Ladies in Black.

First on the scoreboard was PFC in the first half with Ladies in Black unable to reply before the second half was underway.

PFC Maidenz scored in the second half giving them a 2-0 lead, but there was still time on the clock for Ladies in Black to make a comeback.

Ladies in Black pulled one back but ran out of time to score the equaliser as PFC Maidenz held on to win 2-1.

The last game in the women’s division saw Titikaveka Blue Blazes and Matavera FC take the field. Titikaveka was first on the score board with a hat trick from Grace Matenga in the first half.

Matavera tried to come back in the second half to catch up but were unsuccessful in their efforts.

In today’s round, Titikaveka Blue Blazes will take on the Ladies in Black in the opening clash and it will be anyone’s game as both teams display a lot of skill and talent.

Following that game, the young PFC Galz will be playing Matavera FC. The Vibers will be taking on the PFC Maidenz in the final women’s match before the winners of the competition will be announced.

Nikao Sokattak will kick off the men’s matches taking on Matavera FC.

The MC Stallions are set to take on the top of the table Wantoks in the second men’s match followed by Titikaveka Blue Balls versus the Black Wolves clash. Both teams have shown extraordinary skill and talent so its anyone’s game.

The final match of the day will see the PFC Guyz and Boyz face each other to prove who the better team is.