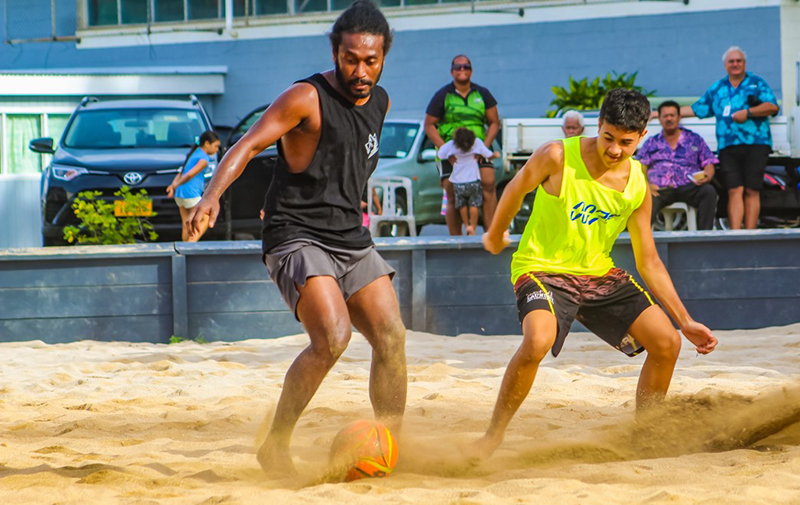 On Wednesday, day two of the CIFA Beach Soccer Competition kicked off in what turned out into another great afternoon for football.

Following that game, the Matavera FC took on Wantoks in a close battle. The side was willing to give up their winning streak from Saturday when they fired the first goal past the Wantoks goalie to give them the lead in the first half.

A lapse in judgement from the Matavera keeper allowed the Wantoks to level the game 1-1.

Another close match up was witnessed when PFC Guyz and Titikaveka Blue Ballz took to the sand court. Both teams were locked at 2-all.

The second half was a test of endurance for the two teams to see who would come away with the win. PFC Guyz held on and managed to slip the ball past the Blue Ballz goalkeeper giving them their second win in the competition.

In the women’s division, crowd favorites The Vibers took on Matavera FC just managing to scrape through with a 2-1 win.

In today’s matches, top of the table PFC Guyz will take on team Wantoks in what is looking to be a thrilling men’s game. PFC Guyz are capable of scoring from anywhere on the pitch and will prove a tough battle for team Wantoks.

The speedy Wantoks team known for their great control of the ball on the sand will surely prove a tough challenge for PFC Guyz.

First and second placed in the women’s division, Ladies in Black and The Vibers will feature in the opening women’s match today.