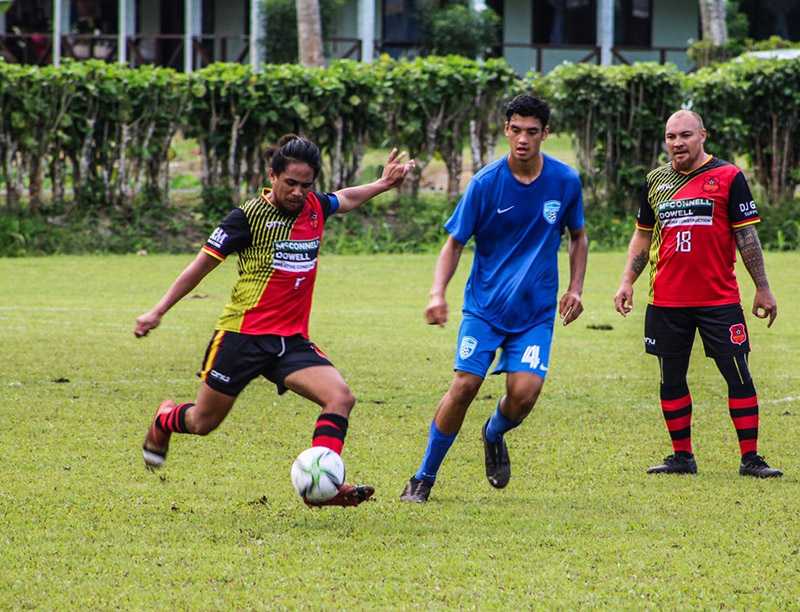 Bottom placed Avatiu caused one of the biggest upsets in the Tower Insurance Premiership after beating the top placed Nikao Sokattak over the weekend.

Nikao Sokattak and Avatiu turned up to CIFA Complex in Matavera on Saturday hungry for success but after the first half, both teams were locked at nil-all.

In the second spell, Nikao’s Toru Mateariki scored to give his side a slender 1-0 lead.

The goal also motivated Avatiu to mount a comeback. Avatiu’s Aaron Simpson took the opportunity to equalise from a spot kick to level the match 1-all.

In the dying stages of the match, Avatiu capitalised from a free kick outside of the box after Tini Maruhi headed the ball into the back of the net to secure a stunning 2-1 win.

In the other premier men’s match at Titikaveka Field, Titikaveka and Puaikura fought tooth and nail for win. Puaikura’s Jarves Aperau along with his backline, held strong and prevented many attempts at goal from the boots of Titikaveka strikers Nuku Mokoroa and Joseph Tuaputa.

In the second spell, Titikaveka received a penalty kick and the side wasted no time putting the ball through to the back of the net before they extending their lead to secure 2-0 win over a struggling Puaikura.

The Tupapa Maraerenga men’s team, who played Matavera in the mid-week match, came away with a 4-2 win.

In the Islander Senior Women’s division, Avatiu defeated Nikao. The beginning of the match saw both teams struggling to put goals away. But a slip up in the Nikao defense was an opportunity seized by the Avatiu team who managed to sink in a goal in the dying stages of the match, from the boots of young Anzia Tere.

Titikaveka and Puaikura senior women’s match ended in a 1 all draw, while on Thursday, Tupapa Maraerenga won against Matavera with a goal scored in the first half.