Sevens rugby next for local clubs 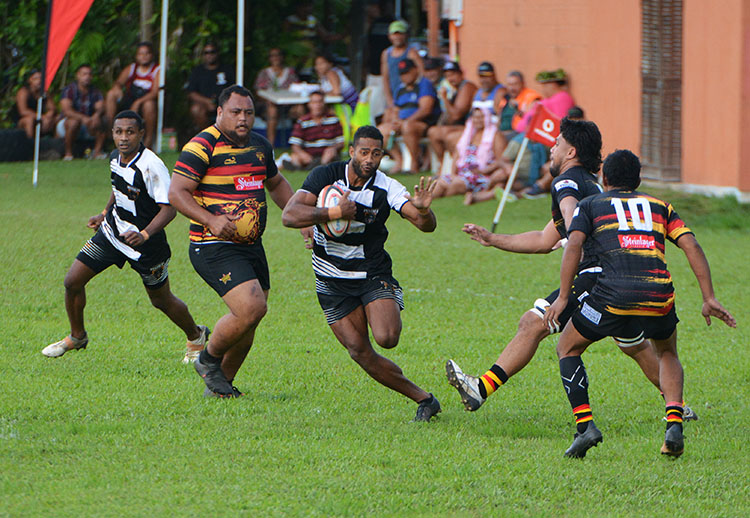 Tupapa Panthers’ Peniasi Dakuwaqa tries to make a break against Arorangi Bears in the Senior A final on Saturday at Victoria Park. 21091314

Local clubs are now shifting their focus to rugby 7s after the completion of 15s season on Saturday.

Tupapa Panthers retained the Rarotonga Club 15s title after beating Arorangi Bears 32-13 in the Senior A final. In the Under-19 final, Avatiu Eels defeated the Bears 29-17.

Panthers coach Darren Piri hailed his players for stepping up and winning the title for the fourth consecutive year.

“We just wanted to come and play rugby. We didn’t want to do what the opposition was doing, just focus on our own game and doing the basics right,” Piri said.

“It’s really good to have the players turning up to training (last week), they focused on little things like getting their lineouts and scrummaging right to get themselves ready. “Winning the title for the fourth consecutive year is a great achievement for the boys and the club.”

Piri said the team would now turn their focus to the 7s competition to be held later in the year.

Arorangi Bears coach Kevin Iro said they lost the game in the first 20 minutes when the Panthers managed to amass a good lead. In the second half, both teams scored a try each.

“It was the first 20 minutes perhaps where we lacked discipline and we can’t afford to do that against a quality side like Tupapa,” Iro said.

“We just didn’t do enough and all credit to Tupapa, they were a better and the dominant side. We made the mistake of kicking the ball to their speed men too much and we paid the prize.

“But we are proud of our boys for a good season and making it into the grand final. We just got to come back better and stronger.” Tupapa Panthers players pose with the trophy after the win on Saturday. 21091317

In the early afternoon all the Under 9s and Under 11s clubs – Tupapa Panthers, Arorangi Bears, Avatiu Eels and the Takuvaine Reds who played Quick Rip Rugby – received prizes from Vodafone.

Cook Islands Rugby Union’s Ben Koteka said: “Thank you to the Tupapa Rugby Club for hosting our finals, all the clubs and teams, coaches and management, all our sponsors, media team, the referees, admin team, the volunteers and all the spectators for all your support – meitaki ma’ata and God bless always.”