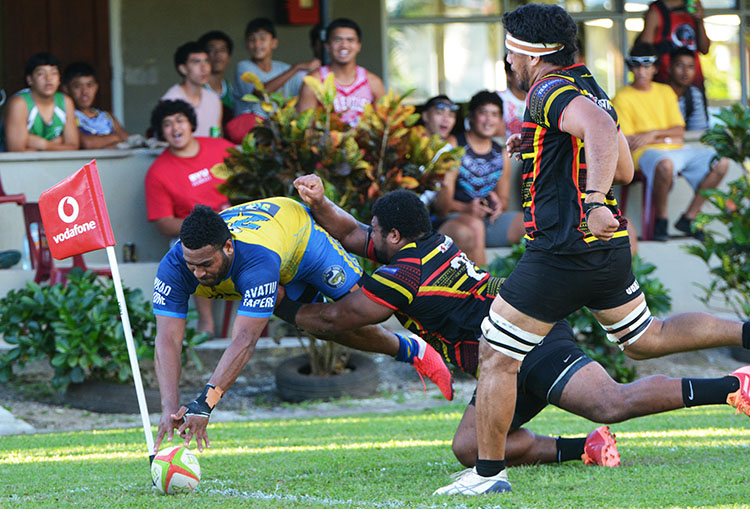 Mika Leawere’s effort was not enough to save Avatiu Nikao Eels who went down to Arorangi Bears 17-22 at Raemaru Park on Saturday. 21071111

Arorangi Bears made a superb comeback in the second spell to win their first Senior A match in the Rarotonga Club 15s competition over the weekend.

In the feature round two clash at Raemaru Park on Saturday, the home side defeated Avatiu Nikao Eels 22-17.

In the other Senior A clash, Tupapa Panthers thumped Takuvaine Reds 38-6.

The Bears versus the Eels match proved a tit for tat affair especially in the second spell. Although the Eels scored three tries to one and led at the halftime break by 10-9, they were unable to shake off a persistent Bears team.

The Bears were led by their point scoring machine and first 5/8 Viiga Ruepena who scored a total of 19 points – that also included a try from a quick lineout – that caught everyone by surprise.

As expected, this was a tough and uncompromising match between these two teams.

The best players for the Eels were barnstorming number eight Lai Rogorogoivalu and their energetic hooker and captain Joshua Caffery. For the Bears, Ruepena and his loose forwards Andrew Purua and Fale Sooialo stood out.

In the other Senior A grade match, the Panthers extended their lead in the competition after beating the Reds 38-6. The Panthers led at halftime by only 14-6.

Cook Islands Rugby Union’s Ben Koteka said: “It was great to have the Reds involved in our competition again and they kept the Panthers honest in the first half although as the game wore on their lack of fitness was evident.”

“This is only the Reds first match of the year and together with their experienced coach Frank Karati they will get better and I am sure they will be threat to all teams this season.”

Again, it was the Panthers extra fitness together with the express pace of Peniasi Dakuwaqa, Tua Ravula and Junior Buresova who helped them to finish stronger in this match.

This was another exciting contest with the Eels racing away to a 19-0 halftime lead with tries to Vaiana Rima, Shae Te Whata and Pare Noovao. The Bears replied in the second half with two well-taken converted tries to utility back Rima Browne.

However it was the final try to winger Mahana Sijp that sealed this win for the Eels.

“This week we welcome the TKV Reds women’s team to the 2021 competition mix!” Koteka confirmed.