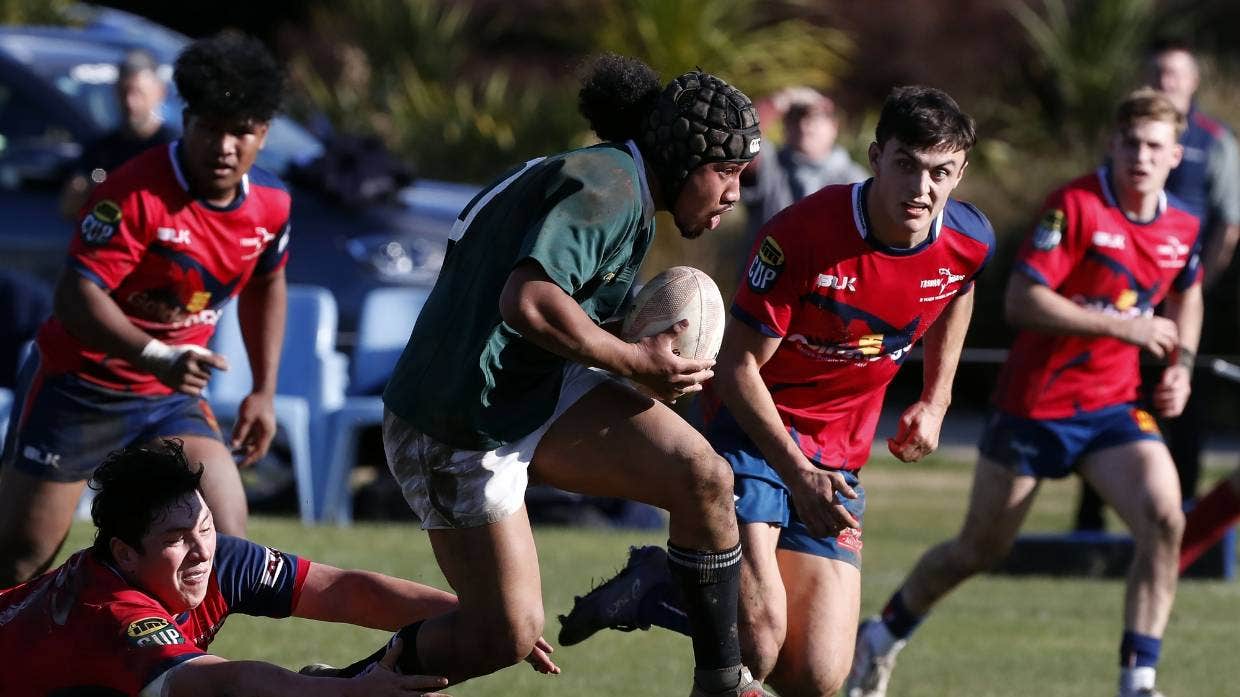 The visiting Cook Islands squad couldn’t capitalise on a first half lead during their world cup qualification warmup against Tasman Mako on Tuesday.

Nelson got a taste of international rugby this week as the Cook Islands took on a Tasman Mako XV by the beach at Tāhunanui.

The home side came out on top 31-24 in a tightly contested match, played in front of a few hundred spectators on Wednesday afternoon at the Tāhunanui Playing Fields.

The match served as a warmup for Tasman’s upcoming NPC campaign and the Cook Islands’ Rugby World Cup qualification match later this month.

Initially set to be played at Trafalgar Park, the venue had to be shifted at late notice due to the heavy rain in Nelson overnight.

The Mako XV was mainly made up of developmental players, with seven Tasman players on All Black duty as well as some key NPC squad members being rested.

While there were a lot of new faces, several squad members from the 2020 championship-winning team also took the field – including captain Quentin MacDonald​, Isaac Salmon​ and Te Ahiwaru Cirikidaveta​.

While the Mako dominated the set-pieces and had the lion’s share of territory and possession in the first half – they went into the first half break down 14-12.

Mako right wing Saul Lewis weaved in and around defenders on a 40-metre run to open the scoring, with left wing Amanaki Veamatahau ​dotting down soon after to take the score to 12-0.

The Cook Islanders struck back with two late tries in the first half though, including a wonderful counter-attacking effort on the stroke of halftime that ended up with fullback Te Puhi Rudolph​scoring under the posts.

In the second half, the home team scored another three tries to claw the lead back, including two for skipper MacDonald.

The match was part of the Cook Islands preparation for their qualification campaign for the 2023 Rugby World Cup in France.

Tonga, Samoa and the Cook Islands are all in New Zealand this month for the latest round of Rugby World Cup qualification – after issues with Covid-19 forced the cancellation of the Oceania qualifying tournament in Papua New Guinea in June.

Because of the time constraints for qualifying, the Cook Islands progressed to the next round as the highest-ranked qualifier – eliminating Papua New Guinea, Niue, the Solomon Islands and Tahiti from contention.

Over the next two weeks Tonga and Samoa will be battling it out to see who can secure the Oceania 1 spot at the 2023 Rugby World Cup.

The loser of that playoff will then take on the Cook Islands on July 24, with the winner of that game making it to the Asia/Pacific qualification match – to be played against either Hong Kong, Korea or Malaysia.