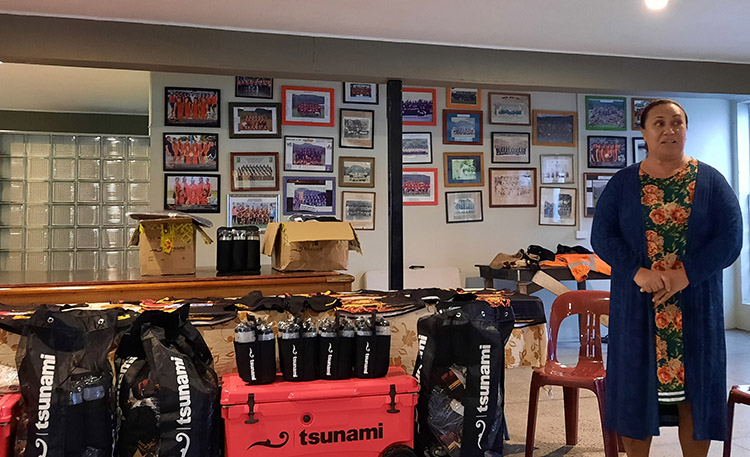 Vaine Wichman of Cook Islands Building Supplies, with the new club kit on display, thanks Arorangi Rugby Club for the sponsorship partnership agreement at a club event on Friday last week. SUPPLIED/21090822

Arorangi Bears Senior A grade will be looking to break a 10-year drought this Saturday after rain put a dampener on their grand final against the Tupapa Panthers last weekend.

Arorangi Bears secretary Teariki Purua said there is much excitement among the club’s 1000 members as the Bears prepare to end Tupapa Panthers’ three-year reign in the Rarotonga Club 15s competition.

The action kicks off about 11.45am on Saturday at Tupapa Field with a number of club grand finals in the lead up to the highly anticipated Senior A battle at 4pm.

“We are very excited, it is the first time in finals for us in ten years,” Purua said.

“I’m not sure what has made 2021 such a good year for us, but I think it is the spirit of the boys coming together.

“It must have been a fluke,” he joked.

“The boys were definitely more focused this year, and with the new coaching staff, I think the coaching staff have made the difference.

“Our local boys are young boys and there has been good leadership this year, I am 100 per cent confident in my boys; I think they will win.”

The club has also celebrated with a cash injection from multiple sponsorship partners.

Rain didn’t dampen player spirits on Friday last week following cancellation of the Saturday final, as the club came together to acknowledge the support of the businesses and community during the 2021 season.

Several organisations made a commitment to provide $3000 annually (in cash/or kind) to maintain operations of the club facilities, training and game supplies and strips, and expenses for development of younger teams over the coming three years.

At the meeting club president Arama Wichman said: “Let’s thank God for this partnership we have with our corporate community who have agreed to walk with our club for the next three seasons.”

In his blessing address, Tauturu Orometua John Andrew, praised the players for their dedication, and reminded them “there is a village behind them, just as there is always God”.

A new set of playing gear for all teams was a part of the package and blessed by Andrew on the evening.

Vaine Wichman, who spoke on behalf of sponsors Cook Islands Building Supplies, acknowledged families and friends who had supported the club over the years.

“Without them, we wouldn’t be here today.”

Arorangi Rugby Club has been affiliated to the Cook Islands Rugby Union for over 40 years.

It is one of the Rarotonga clubs that still fields full teams and reserves in the Under 8, 10, 14 and 19 year age groups, as well as reserve team and premium team grades.