The unforgettable sporting moments of 2020 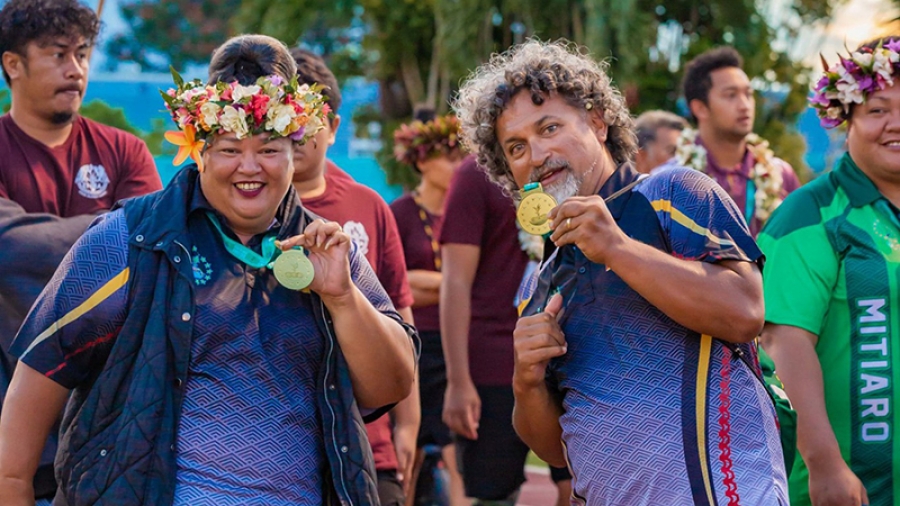 Despite cancellations of several sporting events due to Covid-19, there were plenty memories made on and off the field in 2020.

Here are some of the moments that shaped 2020.

The young and spirited Arorangi Bears stunned top teams to win the Bishop’s Cruises Cook Islands Rugby League Nines in Paradise tournament over the weekend. The Bears defeated Avatiu Eels 10-0 in the final on Saturday to finish the two-day tournament held at the BCI Stadium in Nikao, undefeated.

The tournament will be held from January 9 to 13 at Scarbro Tennis Centre in Auckland, New Zealand.

Touch season off to ‘perfect’ start

The 2020 Touch season received a perfect build-up ahead of their domestic competition, thanks to the Cook Islands Beach Games. The games which is being held at the Beach Courts in Nikao features four sports. Apart from Touch rugby which ended on Tuesday, the event also has 3x3 basketball, handball and beach volleyball competitions.

New Zealand now has a gold medal winning team on the FIVB World Tour as Griffin Muller and Sam O’Dea posted a pair of wins on Friday over teams from the United States to capture the inaugural VolleyFest Cook Islands.

By the skin of the teeth

Tupapa couldn’t get a win out of their two qualifier matches – but two draws was enough to put them through to the Champions League. Tupapa Maraerenga football club twice came from a goal down to secure a 2-2 draw with Veitongo FC – and to qualify for the group stages of the Oceania Champions League.

Tupapa needed only a draw from the qualifying stage contest in Auckland last night, after they also drew with Samoan club Lupe Ole Soaga SC earlier in the week.

The player alleged to have manhandled a referee after League Nines final last month has been handed a monetary player after a special judicial hearing this week. Tai Nelio, the Cook Islands Rugby League competition coordinator, said after reviewing the complaint from the referee, the judicial committee decided to impose a monetary fine as well as give a caution warning to the Avatiu player. The fine has to be paid before Thursday, February 20.

The national netball body recorded a small loss of $207 after spending a bulk of $152,618 income on the national teams. The Black Pearls took part in a number of international events which has resulted in its improved 12th ranking. According to the financial report which was tabled at Wednesday’s annual general meeting, Netball Cook Islands’ total annual income was $106,163.

Tony Iro will coach Cook Islands at the Rugby League World Cup 2021, confirmed the sport’s national body. An Australian media reported that former Kangaroos coach Wayne Bennett has been appointed to guide the Kukis to the World Cup which will be held in England. But Charles Carlson, the chairman of the Cook Islands Rugby League Association, refuted the report.

The country’s major team sports have called off all their games – but rugby league refused to go down without a fight. Rugby league boss Charles Carlson has defended his code’s initial refusal to help combat the Covid-19 virus by calling off its games. Cook Islands Rugby League finally cancelled its local competition yesterday – but only after being publicly called out by Secretary of Health Dr Josephine Herman for failing to understand the significance of the country’s challenge. (League later cancelled the domestic competition).

Cook Islands Sports Awards has been postponed until further notice due to the coronavirus outbreak. Although there are no cases of Covid-19 in the country, Cook Islands Sports and National Olympic Committee says they are taking a proactive approach of cancelling the event.

The decision was made in light of the complexities posed due to the coronavirus pandemic, said the confederation. Pauline Dean, Cook Islands Football’s competition and club licensing manager, said they had been ready to host the tournament.

However it was not an easy win for the top seeds in the two-day tournament which featured 16 doubles pairs battling it out in Division A and Division B.

The Baudinets had to overcome strong challenges in the semi-final and the final to claim the top prize.

Alex Beddoes and Jane Nicholas were the big winners at last night’s Cook Islands Sports Awards held at the Edgewater Resort and Spa. Beddoes, double gold medallists at last year’s Pacific Games in Samoa, and Nicholas who has qualified to represent the Cook Islands at the next Olympic Games won the Sportsman and Sportswoman of the Year awards, respectively. The Cook Islands Sports and National Olympic Committee (CISNOC) are hoping a reboot of the Cook Island Games will help boost domestic athletes in the country. Cook Islands has a team of five set to represent the country in the delayed Tokyo Olympics next year, but all of them are based overseas.

Owen Lewis, general secretary of the National Olympic Committee, said the restrictions on international travel due to Covid-19 have revealed they need to focus more on developing their athletes on home soil.

Cabinet yesterday approved for contact sports to resume after placing a temporary ban due to the Covid-19 pandemic. However Cook Islands Sports and National Olympic Committee (CISNOC) is advising sporting federations to adhere to hygiene practices at their upcoming events despite the country’s Covid-19 free status.

KAPS caused a major upset to get crowned the new champions of the Vodafone Mixed Touch Competition. The side defeated top favourites 007 4-3 in a closely contested final on Wednesday at Nikao field.

If first you fail, Tri again

Swimmers brave ‘incredibly tough’ water conditions in the 38th annual Tin Man triathlon. Newbies vied with veterans in this weekend’s Tin Man: Roland Neururer took out the men’s title for the 10th time, and Adrianna Skurosz returned for her second victory in the women’s competition.

Up to 500 people turned out this weekend for the biggest Cook Islands event since the Covid-19 lockdown – the Kumete Games. It was all fun and games at the Kumete Sports Day at BCI stadium this weekend. Village teams participated in events ranging from 200m track to relay events, long jump and shot put.

Avatiu/Nikao were this year’s champions, gaining 639 points to beat out defending champions Arorangi on 444. Others teams’ scores were Tupapa Maraerenga on 235, Ngatangiia/Matavera on 75 and Titikaveka on 58.

Netball Cook Islands will run a six week junior competition after their domestic league earlier in the year got cancelled due to Covid-19.

The 2020 Rarotonga Netball Competition featuring the top local clubs in age groups, seniors and premiers kicked off in early March, 2020.

Cook Islands Rugby League has appointed Anthony (Rusty) Matua as the new coach of the national women’s team. The Auckland-based mentor who served as the head coach of the New Zealand Maori Ferns last year will guide the Moanas in the 2021 Rugby League World Cup.

Matua, who is a Cook Islander, was also the assistant coach of the Kiwi Ferns in the 2013 World Cup England.

No complaints, despite making a racquet!

An impressive turnout of 48 teams took to the courts to compete in the first ‘Clash of the Generator’ fun Cook Islands badminton tournament.

The Princess Anne Hall was packed with families and friends who came along to show their support.

Cook Islands Football Association will be receiving an additional $150,000 annually from the Oceania body to boost the development of the sport in the country. This after the Oceania Football Confederation revealed it will invest an unprecedented $43 million directly into football development in 2021 and 2022.

In a statement, OFC says it will increase its development grant to its 11 member associations by more than $3 million in the coming two years to allow them to place a stronger emphasis on governance and football development. Grassroots Division of footballers in action at the CIFA complex. Photo: CIFA Media. 20111713.

Sixteen local businesses and government departments took to the water at Vaiana’s beach in Nikao on Saturday for the corporate paddling races.

As always, it was a fun filled day with enthusiastic teams pounding through the races.

Three years in a row

Confusion over extra time play rule as Tupapa Panthers beat Avatiu Nikao Eels to win the domestic rugby union title for the third consecutive year. Tupapa Panthers made a late comeback to retain the Rarotonga Club 15s title in a thrilling showdown against Avatiu Nikao Eels on Saturday. The final played at Raemaru Park in Arorangi had spectators from both sides on the edge of their seats as the Panthers and Eels fought tooth and nail for the title.

Two domestic records were set in the weekly Rarotonga Cricket Club competition last week. Turangi’s June George became the first female cricketer to score two centuries after smashing 121 runs – including 10 sixes – against Avana in the opening round of the women’s competition on Saturday.

Her feat was followed by another milestone achievement – Turangi batsman David Piakura blasting a 36-run over, a first in the local competition – against Avana men’s side.

Over 3000 athletes from 11 islands teams will compete in 24 sport codes at the Cook Islands Games. Cook Islands Sports and National Olympic Committee president Hugh Graham addressed the audience at the opening ceremony last night saying, “tonight, that dream comes true, congratulations”. “In 2020 the world certainly changed; the Covid-19 pandemic has changed all our lives. Global economies have suffered including our own, but the Cook Islands Games has certainly been a positive outcome that was borne out of this global tragedy.”

A short man with a huge sense of humour – that’s how local football association president Lee Harmon described football legend Diego Maradona, who passed away this week. Regarded as one of the greatest footballers of all time, Maradona succumbed to a cardiac arrest on Wednesday, aged 60. His death triggered mourning around the world including the Cook Islands. The national football association yesterday paid tribute to the fallen Argentine maestro.

The Maroons, who entered the three-match series as underdogs, won the decider 20-14 early yesterday. Holmes scored the opening try of the match to give his Queensland side an early lead. The Puaikura women’s team after winning the Round Cup and Knockout Cup final. CIFA Media/20121306

A number of firsts dominated the 2020 Rarotonga Cricket Club competition finals on Saturday. For the first time in the history of domestic cricket competition, a super over decided the women’s final winner and a hattrick was achieved in the men’s showdown. Held at the Turangi Oval, the showdown featuring top Rarotonga clubs saw an intense battle between them for the titles.