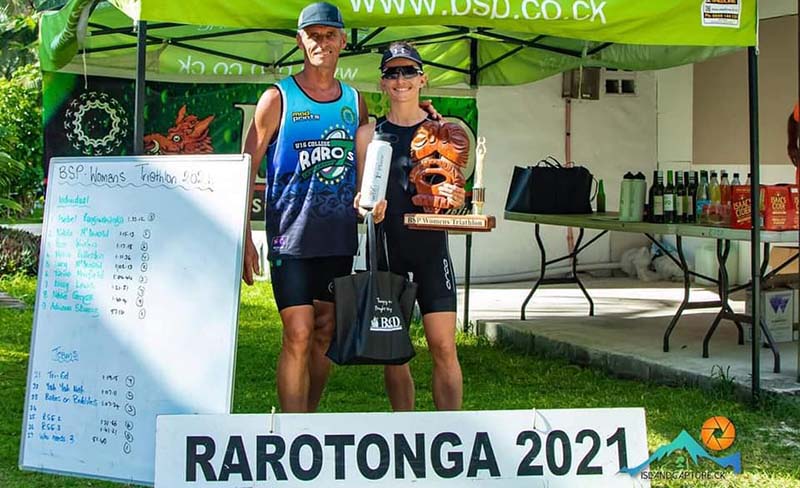 A beautiful afternoon drew a good number of competitors and spectators to the Triathlon site at the Enua Manea Hall in Titikaveka.

It was a sunny and glorious afternoon on the land, however the conditions for the swim were tricky with a swell and current making for a tough start to the afternoon for some.

First out of the water was seasoned competitor Serena Hunter for her team Yeah Yeah Nah followed very closely by Kelly Pick of Who Needs 3. Next out after a solid swim was the 2020 individual defending champion Adrianna Skurosz.

Onto the bike and the lead was quickly taken by Who Needs 3 Team cyclist Alyce Edwards who set a blisteringly quick pace. The road works near the Sheraton meant that the 16km course had to be changed and the ladies cycled out to YWAM in Vaimaanga and back twice.

Whilst Edwards was setting the pace in the team competition, Skurosz was also putting in a very fast leg in the individual race which she led throughout the afternoon.

From the bike the ladies transitioned to the 4km run which also saw some very fast times being clocked up.  In the teams competition Edwards and Pick for Who Needs 3 took the overall win setting a new record in a time of 51:40 minutes toppling the old record (54:26) which had been held by Vanessa Palmer and Jennie George since 2008.

Skurosz had a very impressive run and stormed home to take out the Women’s Triathlon title for the second consecutive year in a time of 57:16 minute. Second and third places went to Lucy McDonald and Tarina Moorfield, respectively, and in the teams the 2nd and 3rd places were split by only a matter of seconds with Yeah Yeah Nah holding off Babes on Bubbles for an exciting finish.

Cook Islands Triathlon president Roland Neururer said: “It was so fantastic to see so many women taking part in hot conditions, particularly those for whom this was their first ever triathlon. Giving it a go is what it’s all about and putting together a team, or having the courage to tackle the whole event individually is a big achievement for all our ladies.”

The youngest competitor on the day was nine-year-old Nikita McDonald who completed the whole course in a very impressive time of 1 hour 15 minutes.

“Sincere thanks goes to BSP and The Bond Store for their generous sponsorship, as well as the Raina family for use of the land at Enua Manea Hall and to all the volunteers who happily gave their afternoon to co-ordinate, set up and marshal the race and ensure that this was, as always, a hugely enjoyable and successful afternoon.”