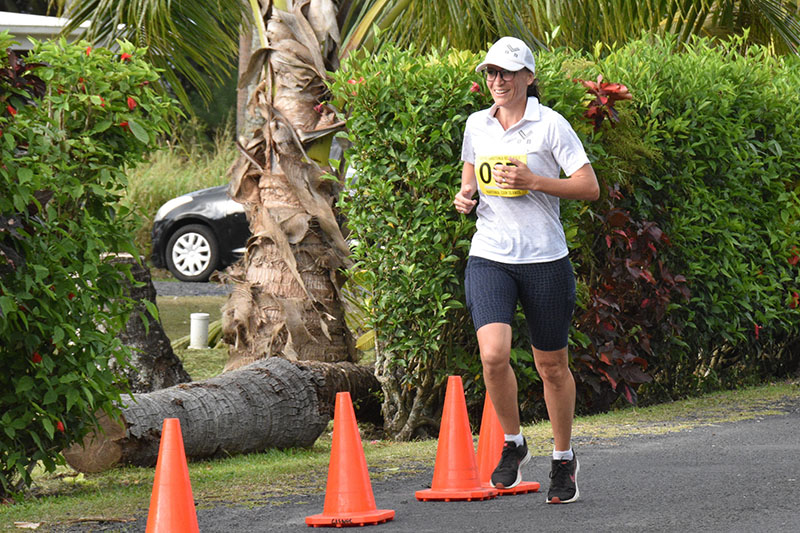 For the second year in a row the Round Rarotonga Road race on Saturday was a purely local event attracting over 330 runners and walkers marking the race’s 44th year.

Event organiser, Matariki Wilson said the race was a showcase of community resilience and strength in what has been a trying two years.

“The Round Raro Road race has transcended to become an event of hope in a time of global uncertainty,” Wilson said.

“The past two pure local Round Raro Road Race has gone a long way in getting local residents to take ownership of the annual race.

“Pre-pandemic local registrations were between 60 to 80 participants at most and to see two years in a row with over 300 locals entered bodes well for a truly colourful Cook Islands Round Raro Road Race.”

Wilson said local involvement in the event had fueled international interest for the next race in September 2022, provided travel is permitted.

After crossing the finish line on Saturday, Street said it was a good race but tough.

“The South Easters were up and the last 10 to 12 kilometres in that headwind was pretty taxing.”

Street said a lot of work went into the race and he was glad to take a breather.

After the race, Henderson said: “I just wish I had my young legs back again.”

“We had that strong wind in our face coming for the finish so that was a bit nasty, otherwise you couldn’t have really asked for a nicer day,” he said.

Normally running barefoot, Henderson wore shoes this time which he said was because of the recently sealed roads that were a bit rough.

Henderson said “he’s not hanging up the towel yet” and will run his 31st race.

Crossing the line first for the women was Adrianna Skurosz, who finished the race in three hours, four minutes and 41 seconds.

Biking alongside her was her husband, Jakub Postrzygacz. Skurosz said together they were an amazing team and she would not have done it without him.

“It was really nice to just go through all this pain together and have him chose the soundtrack music for me and pass me my nutrition.”

Skurosz said after 20 years together, their marriage counselor told them to do something together for fun apart from work, so they decided to do Round Raro.

“I actually asked him ‘are you ok that you’re not running? He was like ‘I’m relieved, I’m really happy to be your support person, you do the running’.”

First place in 10km men’s race went to Fijian runner Rupeni Mataitoga. After the race, Mataitoga said he was very happy with the result that he trained really hard for. He set the target to win the 10km Round Raro Race two months ago. Mataitoga is also the defending champion of the 10km division in the BSP Aitutaki Marathon.

Round Raro organiser, Wilson said the event generated good funding through the registration fees, but funding generated was less compared to previous years due to border closures.

She adds while Round Rarotonga is still a key for fundraising, it has become a platform for community hope, team building and fitness goal setting.