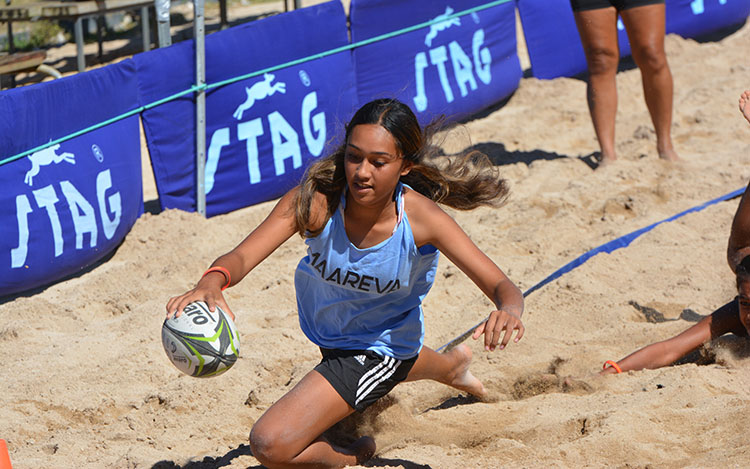 A Palmerston player dives over for Touch points in the under-16 division on Monday. KATRINA TANIRAU/21011121

Defending champions Notchya is one of the top bets in the Cook Islands Beach Games Touch competition.

The Games started yesterday with Touch competition at Nikao Beach Courts. Four teams are battling it out in the under-16 mixed and 10 in the open mixed division.

Brown said Notchya would be the favourites alongside RBDC, who won the Boxing Day Touch Tournament, a fortnight ago. RBDC finished second at last year’s Beach Games.

“RBDC is fielding two teams as well. We also have our regulars Untouchables who are playing under a new name Sweet Sandsational,” she said. “There are also newcomers Pukapuka and Palmerston who have come from the Cook Islands Games and they will be trying to stamp their mark. It will be an exciting competition; we have some strong teams competing and some top Touch players participating.”

Beach basketball will start this afternoon. Games will start at 3pm on most days over the 14 days, however starting times will differ daily.

More than 90 teams are set to participate in this year's Games, a two-week tournament which kicked off on Monday.

It’s the multisport tournament’s third year, and this year it will feature beach football for the first time.

Secretary General of the Cook Island Sports and National Olympic Committee, Owen Lewis, said the beach games had capitalised from the success of last year’s Cook Island Games, with record numbers signed up to participate.

“There’s been a big surge in activity and people playing more sport since the Cook Island Games, so we’re really pleased ... The Cook Island Games captured the imagination of the whole country so we’ve got a lot more people active and they’ve stayed active, and that's a really positive thing for our NCD rates and health in general,” he said.