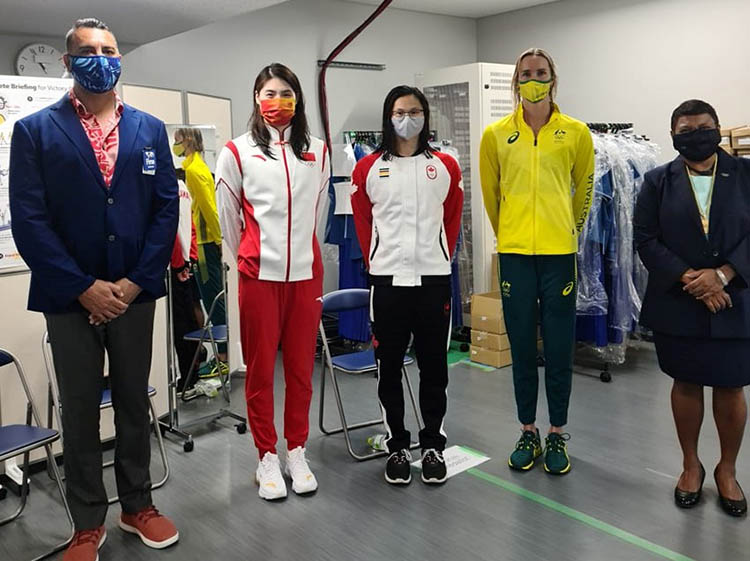 Cook Islands Aquatic president Romani Katoa with the athletes he presented medals to at the Tokyo Olympic Games. SUPPLIED/21072708

Katoa was on hand for the women’s 100 metre butterfly medal ceremony as Canada, China and Australia picked up consecutive gold, silver and bronze on Sunday - but without physical contact with the athletes.

“It was a very unique experience especially with the Covid-19 protocols of not making contact with athletes and ensuring safe distances while wearing masks at all times.”

Katoa said as a FINA, the international swimming bureau, board member, he was very proud and honoured to present the medals despite obvious changes.

Athletes are now presented medals on plates to avoid contact, then they place the medal around their neck themselves.

Katoa said he was very nervous as they were the first medals to be presented for swimming on the second day of competition, and joked he didn't want to fall over while presenting each medal.

“I also managed to give the athletes the yellow ei pupus from Mangaia. These were a gift from Numangatini Ariki of Mangaia to give to athletes, friends and colleagues at the Games,” Katoa said of the special moment.

“It was great and it was fun as we got to present to an Australian athlete who was part of the 4 x 100 metre freestyle relay team who broke the world record the day before.

“I also had a good chat with the swimmers about how they felt in their race, and wished them the best of luck in their next events from all of us in the Cook Islands.”

Katoa said the Japanese and International Olympic Organising Committee protocol staff also noted that he was the only one wearing a pareu shirt under his suit jacket “which is normally a very formal stuffy dress code with buttoned shirt and tie”.

“However, being from the Cook Islands and Oceania, they said it was colourful and appropriate so I was allowed to present in my pareu and suit which drew much support nice and manea from around the venue.”