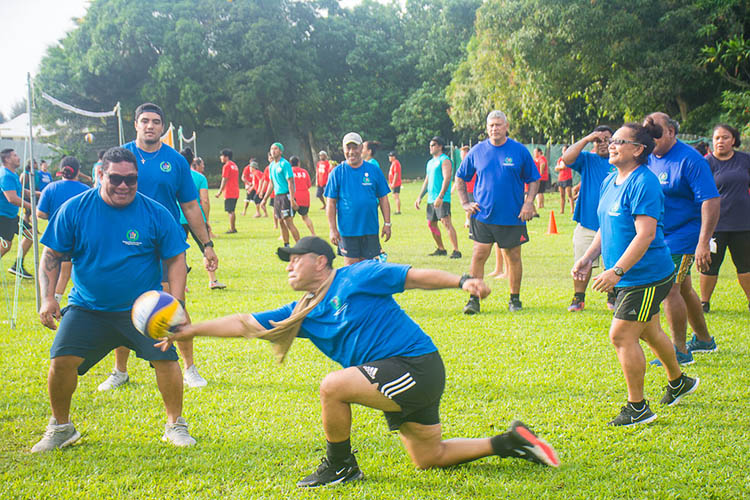 One participant delivers a diving serve in a game of volleyball at the 'MINIstry Games' on Thursday. CISNOC/21070516

The Cook Islands Sports and National Olympic Committee (CISNOC) hosted the MINIstry Games at the Avatiu Field on Thursday last week, where an excellent display of sportsmanship, friendship and Olympism was shown.

The event concluded the Olympic Week which was celebrated by a different event each week to promote healthy living and staying active.

Owen Lewis, secretary general for CISNOC, said: “Everyone really enjoyed themselves, great to see them outside of their usual working spaces and enjoying each other’s company. Everyone showed great team spirit and it was just great to see the excellence of the public services.”

He added that the team at CISNOC are looking forward more events so they can get people out of their offices and about moving.

“For us it's about getting people out and active and displaying values of friendship, respect and excellence, which was exactly what was displayed on the day,” Lewis said.

There were 20 teams altogether formed by the different ministries. They took part in games of touch, volleyball, and lastly tug of war, which was the big event of the day in which every team showed particular competitiveness and enthusiasm to win.

According to Lewis, this year’s Olympic Week was the biggest they had ever done.

“It took a lot of work but everyone got into the spirit of Olympism and we are really grateful for all the support we got,” he said.

He said they cannot express enough gratitude to the HOM’s (heads of ministries) for coming on board and for all their help. They also thanked Public Service Commissioner Carl Hunter and Avatiu Club for providing the venue.