Breeding the new generation of swimmers 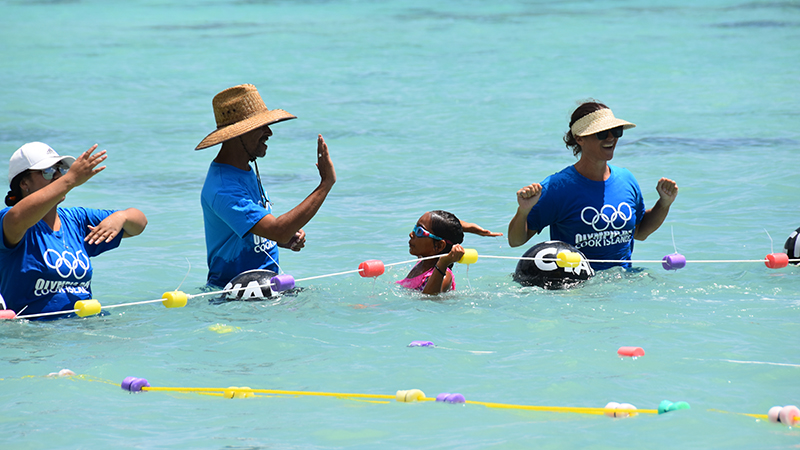 For the first time in six years, the primary schools swimming competition was back on Thursday, March 18.

The event which stopped in 2015 was a major success. Hosted at Vaiana’s, children, teachers and parents cheered about 300 swimmers from Papaaroa, Rutaki, Arorangi, Nikao, St Joseph’s Takitumu and Te Uki Ou school.

Young athletes waded into the lagoon following volunteers into lanes set parallel to the beach. Students had their backs against rope until the starting block sounded the beginning of the race. While in motion, Cook Islands Aquatics Federation president, Romani Katoa stood in waist deep water videoing the action ready to analyse close races.

Students competed in freestyle and backstroke. Five and six-year-olds raced in 12.5 metres lanes and older students raced in 25 metres.

The commentator kept spectators tense, no matter how short the races were, “it looks like lane five is leading… but anything can happen!” In the end Te Uki Ou won the competition, Nikao was in second and Rutaki come in third.

Romani Katoa says the event was “pretty awesome, just seeing all the kids having an awesome time”.

The first inter-school competition was held in 2011, the event was a natural extension of the swimming in schools programme. Headed by the Aquatics Federation, the programme began in 2007.

Katoa says the event took a break because in the past swimming hasn’t been the priority sport.

But feels that’s changing and schools are seeing the benefit. “We’ve had a great response from all the schools.”

The swimming in schools programme runs in term one and four of the school year.

The federation is also wanting to reach out to the outer islands with the programme, says Katoa, “our goal is for every Cook Islands kid to know how to swim.”

They are hoping to go to Mangaia and Aitutaki by the end of the year.

They also want to run a high school competition later in the year and send a team to New Zealand.

It wasn’t always like this, Katoa says there was a large gap of people not being taught how to swim in the Cook Islands.

He says in the 60s and 70s there were big swimming competitions but from then till when swimming in schools was introduced nothing was in place.

“Look at our athletes that compete overseas in sports that are not swimming,” says Katoa, “None of them know how to swim.” Katoa says swimming lessons in New Zealand can be expensive but in the Cook Islands it’s funded, so everyone can learn.

“All our kids are naturals in the water,” he says, adding parents were surprised on Thursday at how well their children could swim.

All swimming events and training have taken place in the lagoon. The federation is pushing for two saltwater pools similar to the ones on Australia’s Southern Coast to be built.

At the event, a student stood on either a stonefish or a sea urchin outside the competition area.

Katoa says before the event volunteers swept the area to make sure it was safe to swim but advised teachers to not let children swim if they were not competing.

He says the incident involved a boy swimming down the beach well away from the event.

“This is the reason we need a swimming pool, so we can swim in a safe environment.”