Beating the heat at the Beach Games 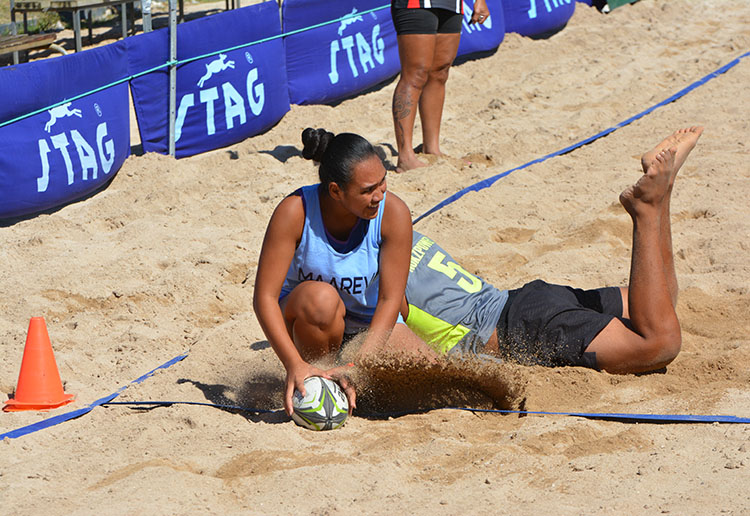 A Palmerston player slides in for a try at the opening round of the Cook Islands Beach Games 2021 beach touch competition. Photo: KATRINA TANIRAU. 21011237

Afternoon rainfall was a welcomed relief for players from soaring temperatures on day two of the Cook Islands Beach Games 2021.

Day two of the Cook Islands Beach Games 2021 saw 3X3 basketball teams heading to the Nikao courts ready to beat the scorching heat and their opponents.

Games started at 3pm with Pool A seeing MAMBA taking on Raro Ballers, Tabusoro Wale versus Pink Unicorns and Drifters Red going up against Pamati Allstars.

There are two categories (men and women) in 3x3 basketball competition and four players per team must be on the court at all times. Meanwhile, on the other side of the beach courts at Nikao the action was red hot at the beach touch competition.

Cook Islands Touch president Daphne Brown said yesterday they expected all teams to come out sharp having figured out how to play the game and adapt to the rules.

Brown says the game of the day was last year’s winner Notchya and runner up RBDC.

She said Monday was an exciting first day of beach touch with the juniors kicking off first.

“This is the first time the 16 and Under grade has been incorporated in the Beach Touch competition,” Brown said.

“The rules of beach touch are a little different to the normal touch played. For the players these differences take some getting used to.”

She said with the competition already kicked off, the juniors are now more comfortable with these differences in rules.

Yesterday, saw Wale take on the mighty Nukz Power and it was also the second-round games between Palmerston and Laudato SI.

Brown said the open grade teams are a mix of regular touch teams and some new teams from the Cook Islands Games wanting to take part in the Beach Games and try out beach touch for the first time.

She added the seniors also had a bit of trouble remembering the differences in rules between beach and regular touch entertaining the crowd with their reactions and facials.

“All the teams have played with enthusiasm show casing some excellent running and passing skills.”

Games will start at 3pm on most days over the 14 days, however starting times will differ daily.

The 2021 Cook Islands Beach Games Festival will officially run from January 11 to 23 at the Nikao Beach Courts with the valued sponsorship from Cook Islands Tourism, Te Aponga Uira, Vodafone Cook Islands and the Bank of the Cook Islands, supported by CISNOC.