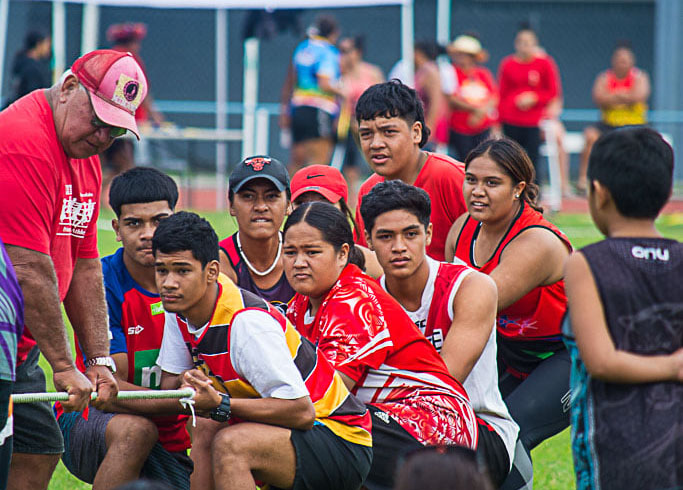 A determined Arorangi battled hard to reclaim the Kumete Cup after a brilliant performance in the annual competition at the National Stadium in Nikao.

Athletics Cook Islands is pleased with the spirit of participation and competition shown by villages that competed in this year’s Kumete Athletics Day held on Monday.

The daylong competition had a number of track and field events for under-5s up to the masters category.

Athletics secretary Ruth Tangiiau Mave said: “Last year with the lockdown of sports and the stadium due to the Covid-19 pandemic threats, the traditional holding of Kumete Athletics Day on Queen’s Birthday Monday, was held later in the month, after the lifting of restrictions.”

“People keen to get out and about flooded the stadium for a family fun filled event of racing, jumping and throwing that saw the huge wooden Kumete Cup leave the defending champions Arorangi hands for the first time in some years, by a strong and gutsy performance from Avatiu.”

Mave said Arorangi came determined to regain the Cup, as was Avatiu who went all out to defend their title.

“The day was perfect for racing and sharing a family tradition of being involved.  Athletics federation organisers have adapted events to include more participation events that create fun and excitement for all ages,” Mave said.

“The under 13-year Kids Athletics circuit had under 5s up to 12 year olds, doing fun sprint starts from sitting and lying face down, to throwing hoops over poles, mega howlers over the goal posts, hop, step jumping and scissor jumps into the sand pits.”

Instead of limiting athletes, everyone got a participation point and allowed inclusion of athletes from the Downs Syndrome and Autism foundations “because winning was not the main focus for this age group”, she said.

The competitive events were highly contested with some new upcoming secondary students coming close to qualifying for the New Zealand Secondary Schools competition in December. “The fun and laughter of new additions to the programme, mother and daughter, father and son relay were impressive to watch with some mama’s smoking around the bends,” Mave said.

Both Arorangi and Avatiu had numbers and talent on their sides and were running closely neck and neck the whole day.

In the end, it was the points from the Kumete Cycle Race (29) held on Saturday that turned the tables and narrowly put Arorangi ahead of Avatiu.

Mave said: “The defenders were gracious in their handing back of the trophy and Arorangi were appreciative and grateful to all the volunteers and families who came to give support but also to win back the ‘log of wood’.”

“Congratulations go to all who competed on the day for their village and the village managers who kept their team spirits alive during the day.”