Thursday 10 June 2021 | Written by Supplied | Published in Other Sports, Sports 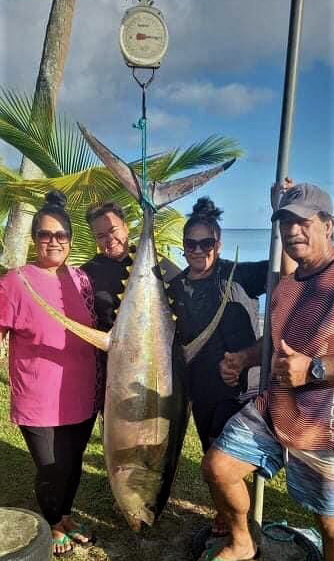 In a first, the mamas led the way in the inaugural Queen’s Birthday Mamas fishing tournament, with the winners netting a hefty yellowfin during the tournament which was held in Aitutaki earlier this week.

The Amuri-Ureia Fishing Association inaugural Queen’s Birthday Mamas fishing tournament in Aitutaki was declared a success with a 65 kilogram yellowfin tuna reeled in by Pitonga Henry, Taiono Tuakana and Mafi Katu-Raga on board “Baby Mac”.

In Aitutaki on Monday, 44 keen fishing Mamas went out to sea, delegated among the 11 boats.

Since the long weekend annual competition started eight years ago, it was the first time the women took on the challenge to participate. Previous years only the Papas, men and sons compete.

“It was a great day for our club to see the women arrive back on shore with catches and those who returned without fish, but still smiling,” Retire Puapii said.

The children also joined in, casting in lagoon catches that went straight onto the barbeque for the wrap up kaikai, he added.

The club extends a big meitaki atupaka to all who contributed to the  eventful day, “from our children, parents, papas, mamas and the helpers.”