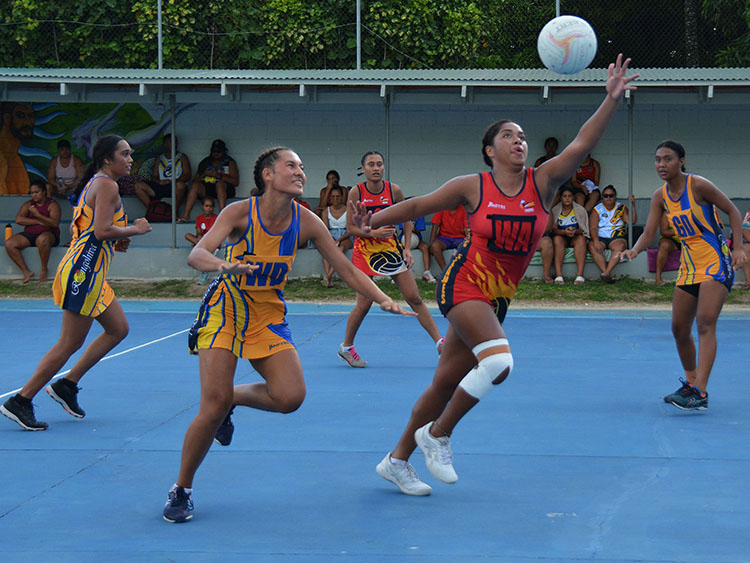 Arorangi premier will feature in this Saturday’s knockouts while Avatiu are through to the semi-final. 21032821

Premier giants Titikaveka and Avatiu are through to the semi-finals of the Rarotonga Netball Club Competition after managing top two finish.

Titikaveka had to fight tooth and nail in their final preliminary match on Saturday in order to retain their top place in the weekly competition.

The side overcame a determined Tupapa 53-46 in an intense battle at Victoria courts.

Tupapa came out of the blocks firing and leading most of first half and second half. The Matenga sisters, Kara and Ani, were composed in shooting circle especially the elder Ani – the sharp shooter – making sure every ball counted.

Tupapa youngsters made it difficult down the court forcing some high ball nicely read by Norma Pepe and Nicole Marurai.

But experience paid off for Titikaveka as they managed to make a comeback under pressure to claim the close win.

Netball Cook Islands’ Tekura Moeka’a said: “It has been great to see young prospects all under 21 taking up the challenge against experience players.”

The competition enters knockout round this week starting with the open 1 and 2 matches today.

“Now it is crunch time for Rarotonga Netball. Round one is usually the round for most teams to test the waters, confirm team lists and players and by round two it is intense, where there are close matches especially in the 15U age group, a few upsets that really count when it comes to placings after the rounds,” Moeka’a said.

The top two teams advance into the semi-finals while the rest of the teams battle at another Saturday for a place in the semis. On the court – only two teams remain unbeaten after preliminary round – 8U and Opens 2 for Avatiu.

“The knockout promises possible surprises and exciting games. There will be a lot of tension on and off the court. You win, you advance, you lose – out of the competition.

“Knockouts start this Wednesday where there will be a lot of contesting and umpires will need to control the game.”

From now on, Moeka’a said all umpires and to some extent bench officials will be neutral.

“Netball Cook Islands has been fortunate to have a foundational Umpires Association led by Autiare Luke, Ngere Puia, Tea Katoa, Luciana Nicholas and Punanga Kaveao who run Mix and Mingle Umpire Workshops and will generate a list of umpires for the games these coming weeks. Again, we cannot thank our netball officials enough for volunteering day in and day out to officiate the games.”

All games in the coming weeks will be played at the Sports Arena.

“We are hoping that the vaccination roll-out won’t cause any delays to our schedule. With visitors coming onshore – we like to encourage all players and athletes to practice social distancing, no sharing of bottles and to keep safe and be kind,” Moeka’a said.

“At the end of the day – netball wins. We have seen an influx of players all ages, influx of coaches and managers and we thank you for your service to the game of netball.”