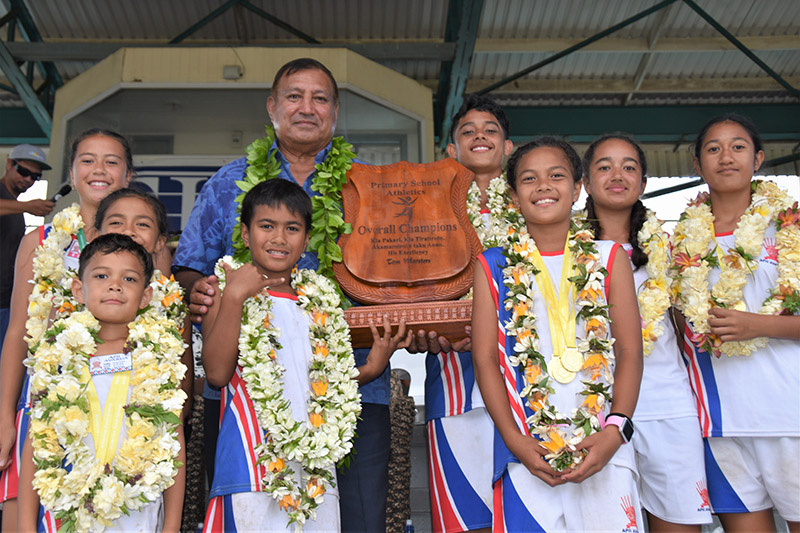 Queen’s Representative Sir Tom Marsters presented the Prince of Wales Athletics trophy to the winning school Apii Avarua at the closing of the annual track and field competition yesterday afternoon. 21092930

Primary schools on Rarotonga competed for the annual Prince of Wales Athletics trophy over two days, with Apii Avarua receiving the coveted trophy at the prize giving awards yesterday afternoon.

Apii Avarua dominated the athletic event with a huge margin of 330 from the second place getter, racking up an overwhelming 893 points.

Hundreds of parents, families and school students gathered at the National Stadium in Nikao to observe and cheer on the athletes participating in the various track and field events.

The determination of the junior kids, starting from the ages of five, in the sprint races was encouraging and the athleticism of the intermediate and senior athletes was inspiring.

Unfortunately, there were a few nasty spills in the athletics track races, however the brave runners were taken care of promptly with medical attention.

The students’ proud mothers who are sisters, Marion Howard and Tevai Napa (nee Howard), were both excited and pleased with their children’s achievements.

Apii Nikao hosted the Prince of Wales Athletics event. School principal Elizabeth Kapi thanked the sponsors and parents for supporting and attending the successful event, and the volunteers for keeping the stadium area clean and tidy.