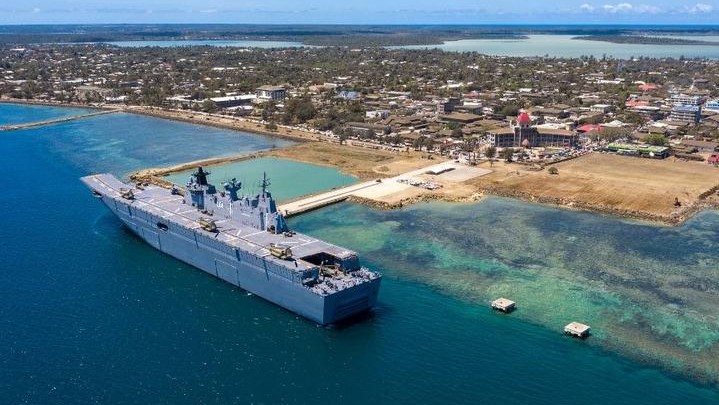 The HMAS Adelaide sitting alongside a wharf in Nuku'alofa to deliver medical supplies following the eruption of the Hunga Tonga-Hunga Ha'apai volcano and a subsequent tsunami. Photo: AFP

The Kingdom of Tonga will go into nationwide lockdown from 6pm on Wednesday.

They confirmed that two cases of Covid-19 have been detected through routine testing at the wharf in Nuku'alofa.

Dr Saia Piukala said 50 people were tested as part of routine surveillance and the two positive cases were found.

Tonga's Speaker of the House, Lord Fakafanua - who is currently in Auckland waiting to return to Tonga - told RNZ Pacific the positive cases and their families are now in isolation at an army base.

Tonga is currently recovering from the Hunga Tonga-Hunga Ha'apai volcano eruption which triggered a tsunami that destroyed villages and resorts and knocked out communications for the South Pacific nation of about 105,000 people.

Three people died as a result of the disaster that occurred on 15 January.

Several countries, including New Zealand, have sent aid but have observed strict Covid-19 protocols such as contactless delivery.