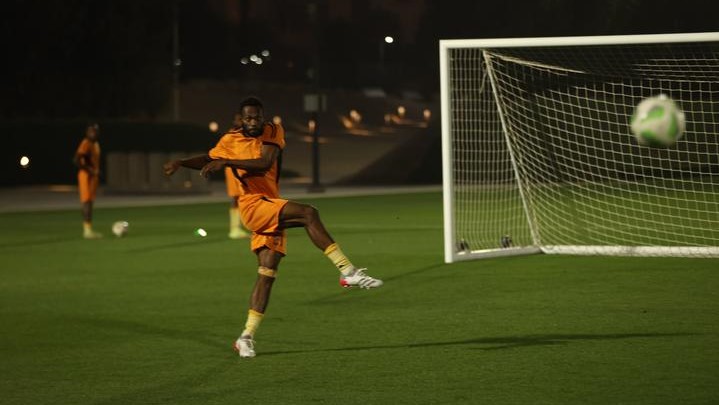 Vanuatu in training before most of their players tested positive for Covid-19. Photo: OFC Media

Solomon Islands made a winning start to the FIFA World Cup Oceania Qualifying tournament in Qatar this morning but Vanuatu's participation is in doubt after the bulk of their squad tested positive for Covid-19.

The positive cases were uncovered following rapid antigen tests conducted prior to the Vanuatu squad departing their hotel for the stadium and meant the team would not have enough players to start their first round match against Tahiti.

While that match was called off there was no such trouble for Solomon Islands who beat the Cook Islands 2-0, with midfielders Atkin Kaua and Alwin Hau both scoring in the first half.

Group B kicks off tomorrow with overwhelming favourites New Zealand up against Papua New Guinea and New Caledonia taking on Fiji.

New Zealand coach Danny Hay said having former Premier League defender Winston Reid for the entirety of the qualifying tournament is a big boost to the team's prospects.

The All Whites are missing a number of key players for the start of the tournament as it falls outside the international window but Hay said the presence of Reid, who played at the 2010 World Cup, is huge for the young All Whites squad.

"The mana he carries amongst the group is massive. He's been there, he's seen it all so he's going to provide a little bit of experience of how to deal with certain pressure situations," he said.

"The reality is there's a huge amount of expectation on us and we're expected to come here and win this tournament and qualify for the inter-continental playoff, so to have the likes of Winston Reid to manage the players through that is going to be really important."

They received another big boost today striker Chris Wood will join the team as he will not be need by his Newcastle club until April 4. He arrives in Doha in time to watch the All Whites opener and will be available for the second game.

Papua New Guinea took New Zealand to penalties in the final of the OFC Nations Cup back in 2016 and the Kapuls squad insist they are not daunted by the prospect of taking on Oceania's top ranked team.

Australian based striker Tommy Semmy is the only Kapuls squad member playing football outside of PNG, while the All Whites squad includes professional players based in 12 different countries.

PNG coach Marcos Gusmão knows it will be tough but said the team is approaching the game with confidence.

"Everybody knows that New Zealand is the favourite for this tournament but Papua New Guinea do not fear any opponent," he said.

"We respect New Zealand but we play strong and don't think Papua New Guinea differ. We are confident and the players are also confident and have a strong mentality for this game tomorrow."

Fiji captain Roy Krisha has arrived in camp a day out from their opening match in Doha against New Caledonia.

The star striker has spent the past three years as one of the top performing players in Indian Super League but Fiji coach Flemming Serritslev said his team was not just a one-man band.

"Yeah of course I rely on him but to be honest I'm relying even as much on the other players in the squad - I'm totally confident with all of the them," he said.

"Roy is a very important player for us. He's our captain so I'm not underestimating his value for us but we have a lot of players who are actually close to Roy Krishna's level, I would say."

The bulk of the New Caledonian squad is locally based, with three players plying their trade in France and one based in Luxembourg.

Coach Dominique Wacalie said it had been a challenging build-up with so few matches.

"They tried to group all the best players of the New Caledonia national team and they had a good camp in France," he said.

"They played some friendly games - also they played a friendly game here in Qatar when we arrived. It's good for them to be part of this World Cup qualification and they're excited to play the first game."

The OFC winner will advance to an inter confederational playoff against the fourth placed team from CONCACAF, which includes teams from North and Central America and the Caribbean.