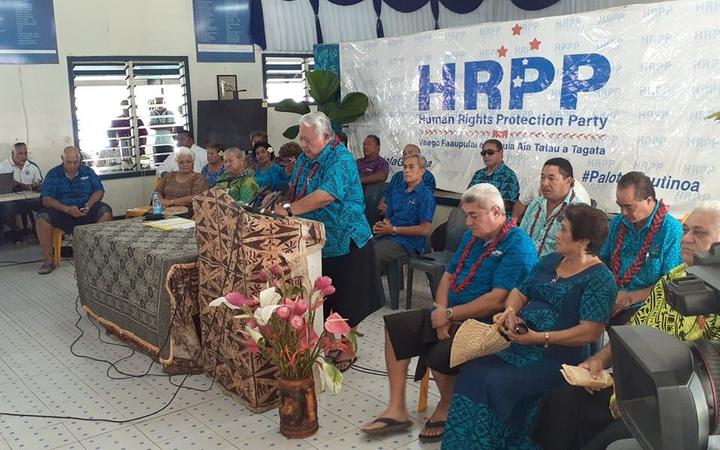 The former Samoan Prime Minister and Human Rights Protection Party (HRPP) leader has informally apologised to the courts after weeks of criticising and protesting against them.

But Tuilaepa Sa'ilele Malielegaoi also told TV1 it's the "nature of their roles" as an opposition to question the three different arms of the Government.

"Sometimes we may be too harsh with the things we say, but that's just the nature of our role (as an opposition)," Tuilaepa said.

"And I apologise to the courts, we should give this arm of Government our utmost respect because their voice is rarely heard and we hardly see them at public places because they hold high positions and have been bestowed such high honour.

"They act like role models and are seen as righteous people and every time we want to find justice or the truth, we go to the courts."

The Samoa Observer reports Tuilaepa also criticised what he called the loss of "integrity" in the courts and the judiciary and claimed they were no longer an independent arm of government.

Tuilaepa claimed that the people now see the courts as a "mockery" with the decisions they've handed down.

"And nowadays, people now look at our judges as if they are looking at something malodorous," he said.

The HRPP leader then made reference to his Government's controversial Land and Titles Court (LTC) suite of bills, which created two independent court structures and removed Supreme Court oversight over the LTC after their enactment.

He said the decision by judges last year to question the Judicature Bill 2020, the Lands and Titles Bill 2020, and the Constitutional Amendment Bill 2020 - which were passed into law last December - was the "first wrong move by the courts".

"They were no longer independent from then on as they have interfered with the politics of the country," said the veteran politician.

The various court decisions after the April general election also came under scrutiny with Tuilaepa describing them as "unfair judgments", while maintaining that he is not scared to criticise the judgments as he wanted the judges to hear his concerns.

"It's good to raise these issues so they know that we understand (the law) and that they are no angels.

"Just because they are judges does not mean that they are right all the time, especially in a country like Samoa where our genealogical connections are very close.

"And as opposition members only in a democratic nation can we voice our concerns."