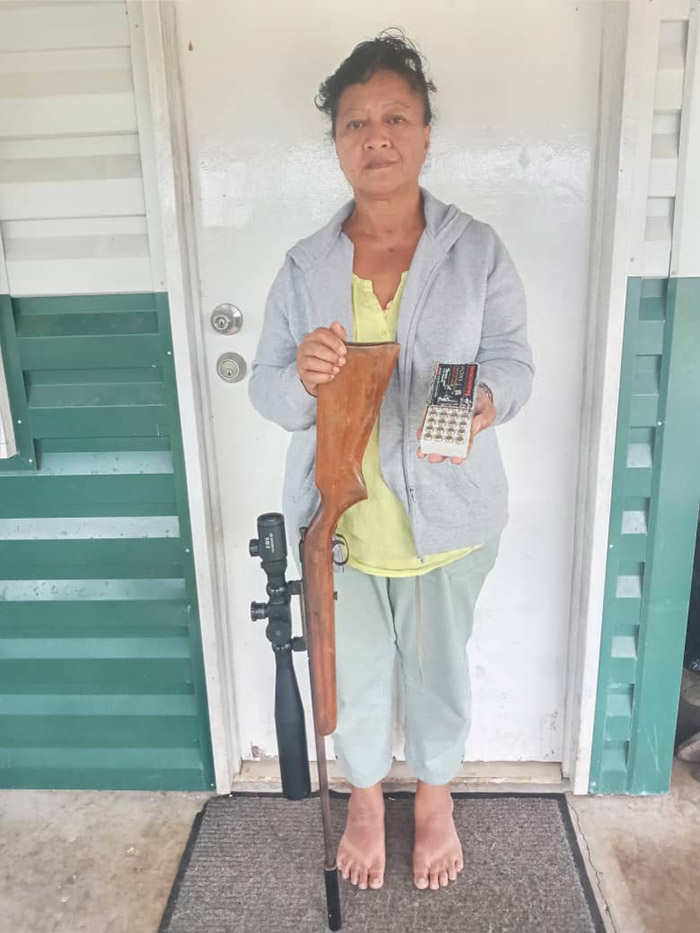 Vaine Marsters is alleged to have led Papua New Guinea police to a stash of ammunition and explosives following questioning. PHOTO: SUPPLIED/THE NATIONAL 21092101

The National news editor Gynnie Kero confirmed Marsters had appeared in court last week after it was reported she had been arrested on September 9 in Milne Bay’s Alotau.

Marsters had allegedly been in possession of 150 pieces of C-4 plastic explosives, 250 rounds of live ammunition and a telescopic Winchester sniper rifle.

While Cook Islands News contacted the Ministry of Foreign Affairs and Immigration with questions on Monday and did not receive a response, on Tuesday ministry director of Pacific and Regional Division Antonina Browne said the matter had just been brought to the ministry’s attention.

Marsters is understood to have been staying illegally in Papua New Guinea after her visa expired on February 4, 2020.

“We are taking steps to gather more information to better inform what we do next, and this process includes calling on our overseas offices in Wellington and Suva,” Browne said.

“I’m sure you can appreciate that this issue is highly sensitive and requires careful management so as not to raise further alarm, or to put more pressure on the situation.

“Our current priority is determining the current status of the national in custody and how best we can support her.”

Police confirmed with The National that Huong was arraigned by senior magistrate Rebecca Kwayaila who fixed September 27 for a hearing to commence.

Marsters was also charged with the same offence but her plea was not taken.

Kwayaila adjourned the hearing to October 4.

It was reported police investigators picked up both Huong and Marsters in different locations with firearms in their homes.

Police Commissioner David Manning told The National that investigations into the firearms and explosive detonators found in both homes were still in progress.

Manning said Marsters led police to the seizure of the explosives and igniters, ammunition and firearm following an alleged robbery that occurred at her house on September 5.

Police launched investigations that revealed the firearm and ammunitions taken were unregistered, with the firearm classified as dangerous with the capability of discharging several 9mm calibre rounds within seconds.

It was reported that a week ago, police recovered the firearm and ammunitions in Mutuyuwa village in Alotau after police returned to Marsters, who upon further questioning, led them to a local construction company office, which was also her residence, where police recovered the explosives and live ammunition in the company safe.