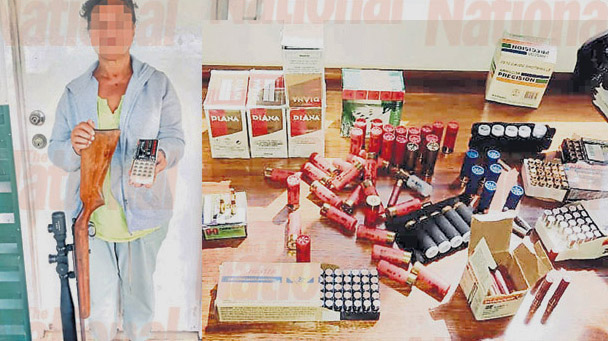 The Papua New Guinea publication The National has reported a Cook Islands woman, 59, has been arrested after being found in possession of explosives, live ammunition and a weapon. 21092080

A Cook Islands woman has been reportedly arrested in Papua New Guinea after authorities allegedly found her with C-4 plastic explosives, live ammunition and a telescopic Winchester sniper rifle.

Papua New Guinea news agency The National reported the arrest on September 14 – the 59-year-old, a widow from the Cook Islands was alleged to have 150 pieces of C-4 plastic explosives when arrested in Milne Bay’s Alotau on September 9, the publication reported.

Cook Islands News contacted the Ministry of Foreign Affairs and Immigration with questions on Monday but did not receive a response.

The ministry early in the day said the matter would be followed up with the Foreign Affairs and Immigration Secretary Tepaeru Herrmann but referred the newspaper to police later in the day.

Cook Islands Police said the matter was not in their jurisdiction.

It is claimed police also seized 250 rounds of live ammunition of various calibres and a telescopic Winchester sniper rifle.

The National reported the woman led police to the seizure of the explosives and igniters, ammunition and firearm.

She was reported to be from Rarotonga and had been staying illegally in Papua New Guinea after her visa expired on February 4, 2020.

Papua New Guinea police were quoted as saying the explosives and ammunition were uncovered following a robbery that occurred in the woman’s house on September 5.

“The investigation was led by the police intelligence officers from the National Capital District and the Southern mobile group special services division policemen who pursued the case despite the challenges,” PNG Police Commissioner David Manning told The National. The woman had lodged a police report after four men allegedly raided her home, and told police that three men walked into her house and demanded firearms and ammunitions.

They allegedly seized a Luger .22 rifle with a mounted Lithgow telescope and 20 rounds of Winchester 9mm Luger 147 Grain ammunition in a box, then reportedly took the time to apologise to the woman before leaving.

The National said the woman reported the incident to police on September 5.

Police then launched investigations that revealed the firearm and ammunitions taken were unregistered, with the firearm classified as dangerous with the capability of discharging several 9mm calibre rounds within seconds, it was reported.

Police then reportedly recovered the firearm and ammunitions at about 10am in Mutuyuwa village in Alotau on September 9.

Police returned to the woman, who upon further questioning, led them to a local construction company office where police recovered the explosives and live ammunition in the company safe.

“She did not want to explain how those dangerous explosives and ammunition were kept in the office,” Manning told The National.

“She has been arrested and charged with one count of being in possession of an unlicensed firearm, one count for being in possession of 20 rounds of 9mm ammunition and one count of being in the country with an expired visa.” Manning said the woman had been charged with counts under the Firearms Act and one under the Migration Act, was released on K5000 (NZ$2027) police bail. She was due to appear in court in Alotau on September 15.