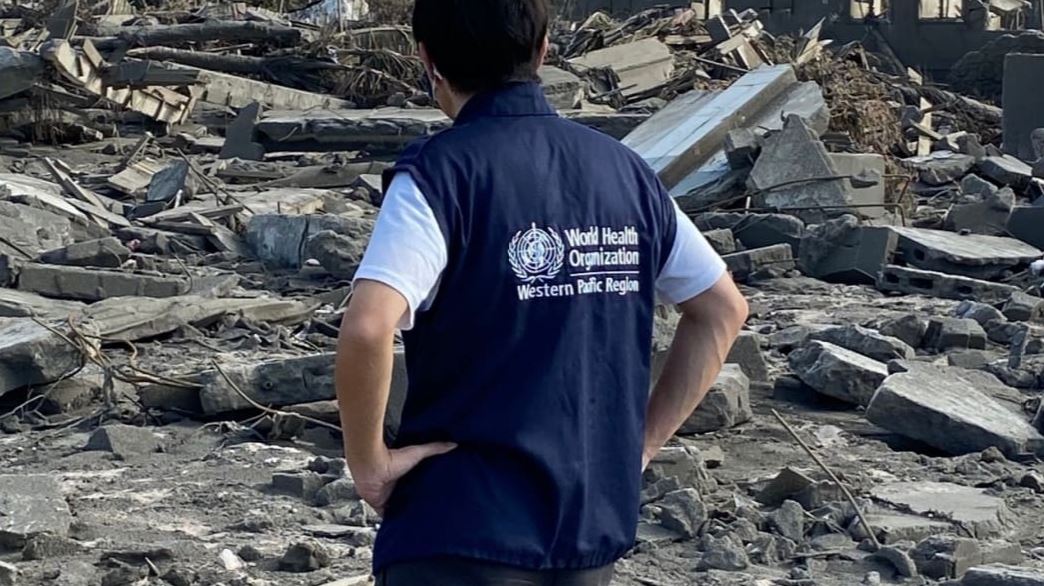 A WHO staff member surveying damage from the January 15 volcanic eruption and tsunami on Tonga's main island of Tongatapu. 2022 Photo: WHO Western Pacific Regional Office

Papua New Guinea is facing a $US30 million demand from Indonesia for illegal waste oil shipments from PNG.

The Post Courier reports that the failure of the PNG Conservation Environment and Protection Authority to respond to Indonesia's demand is further aggravating the situation.

Indonesia is reportedly set to take legal action if its demand is not met.

The money, said to be for the management and storage of six illegal oil shipments, would need to be paid within 14 days by the PNG government.

The newspaper says the shipments are not refined oil but glycol, cyanide, oil slops and sludge.

The World Bank has approved $US14.5 million dollars in funding for the Tonga Safe and Resilient Schools Project in support of the country's ongoing recovery from January's volcanic eruption and tsunami disaster.

The project has been running since 2017 and focuses on strengthening school infrastructure in the Kingdom.

Project Engineer Andrew Hurley said the most common infrastructure problems are with rooves being corroded or not tied down properly.

Globally, Tonga is the second most at risk country to natural disasters.

The authorities in American Samoa have arrested and charged a man accused of making a bomb threats on May 31, which prompted the temporary closure of Pago Pago's international Airport and port for nearly two hours.

His bail is set at $2,000 tala and he entered a not guilty plea to all charges during his initial court appearance this week.

His next court appearance is later next month.

Mr Mayer is the former manager of Pacific Shipping Services.

The number of covid cases in Nauru in the latest counting period is half of what it was in the previous 24 hours.

On Thursday the government announced there were 56 new cases; that compares to 105 on Wednesday.

President Lionel Aingimea said there were 4,138 active cases in the community.

There has been one death, the Commonwealth Games weightlifting gold medallist Reanna Solomon.

Experts in Niue for covid response

A team of five experts from New Zealand have met with medical workers and government officials in Niue to plan for the next phase of their Covid-19 response.

There are eight active cases of Covid-19 at the border in Niue.

"Currently the plan is to provide support to the Niuen officials with their covid planning and logistics, we are looking a little bit beyond the immediate situation to mid to long term planning."

Major Hamilton says the team expects to be there for a minimum of one week and probably two weeks.

Meanwhile, there are eight active cases of Covid-19 at the border in Niue.

Twenty-three cases have been recorded at the border in total since March.