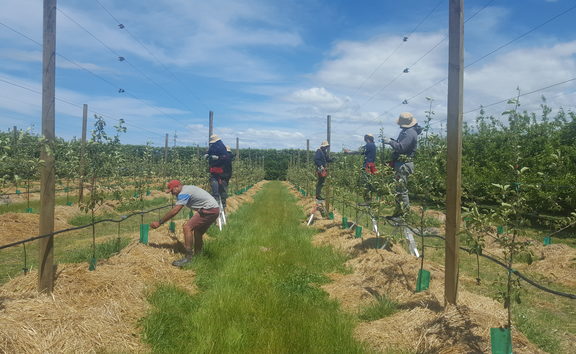 Prospective RSE workers scammed in Samoa; Vaccination for workers not yet mandatory, says Vanuatu union; Tonga's PSA calls for the Secretary to Government to be sacked

Con artists in Samoa are reportedly scamming residents by posing as agents for the government's seasonal work employment scheme.

The Samoa Observer said some of the victims turned out to the Faleolo Airport to fly out to but no charter flight was scheduled.

The newspaper reports a senior ministry official has confirmed that three people were identified by their victims.

Cabinet recently announced that 222 workers travelled for work in Australia's Northern Territory on a scheduled flight on September 19.

The Chief Executive Officer for the Ministry Pulotu Chiu Ling has said the scheme had attracted more than 10,000 applicants, some of whom are public servants looking for better earnings from the scheme.

He also confirmed a flight with workers on a similar scheme in New Zealand was due out this week.

Vaccination for workers not yet mandatory, says Vanuatu union

One of the union's leaders, Ephraim Kalsakau, said there is no law that can penalise a worker who has not been vaccinated against the Covid-19 virus.

He said even if it is covered under the employee's contract, it cannot be effective if Vanuatu's law does not cover it.

While Vanuatu is Covid-free, and its vaccine rollout began successfully in recent months, there's debate about whether employers can make vaccination mandatory for their staff.

Vanuatu's Department of Labour has confirmed that currently, staff who have not been vaccinated cannot be terminated for this reason. Nurses from Vanuatu's island of Efate and offshore islands during their training for administering the AstraZeneca Covid-19 vaccine. Photo: Hilaire Bule

Tonga's PSA calls for the Secretary to Government to be sacked

The Tonga Public Service Association's, Mele Amanaki, claims Mr Cocker was a master of ceremonies at an event in Vava'u for the PAK - the political party headed by Prime Minister, Pohiva Tu'i'onetoa.

She said Mr Cocker breached the Public Service Act by appearing in a formal role at what she says amounted to a political rally - the launch of the PAK's platform for the November elections.

But Mr Cocker denies the claim and said he is taking legal action against the PSA and Ms Amanaki.

He said the event in Vava'u involved the launch of the government's corporate plan, was not a political event and that he is not affiliated with any political party. The Pacific Music Awards will be held online instead of being a live event in Auckland due to New Zealand's lockdown.

The decision was made by Pacific Music Awards Trust.

Reverend Mua Strickson-Pua said they had the safety and wellbeing of communities in mind.

He said although it is a historic moment, people can still celebrate the Pacific music community, just from the comfort of their own bubble.

If Auckland's Alert Level 3 status is extended into November, the Pacific Music Awards Trust will consider a new plan for the event. The RVS Takuare was donated by the Australian government.

It replaces the RVS Tokoro which was also donated by Australia. That boat served the country for almost 34 years.

RVS Takuare can spend around 20 days at sea and is more suitable for female crews.